Say What You Will About Trump’s First Year, It Was Better than Bush’s

Trump is not a nice guy. This is a given in U.S. politics and becomes a flashpoint in news cycles whenever he reminds us of this by rashly threatening war with North Korea, calling some countries in the Global South ‘shitholes’ for being poor and having majority non-white populations or picking fights with major news outlets.

To say that Trump may be one of the worst presidents ever has become commonplace, unnotable, even boring.

But the bully theatrics in Trump’s first year as president is nothing compared to the damage former president George Bush did his first year in office. Trump may be breaking down customs of civility in the highest office, but Bush helped to destroy the lives of millions while evaporating civil and political rights under the guise of national security—all at breakneck speeds.

Trump’s bad attitude and behavior are very easy to name and shame, and Trump has a machine-like efficiency in offending the senses. In response, social media and other major media outlets like late night hosts have adopted a permanent defensive posture, waiting until he says something outrageous before repeating the tried and true pattern of calling him immoral and graciously accepting the applause from the audience, spellbound by the fireworks of civil society reacting to a sitting president with such indignation. 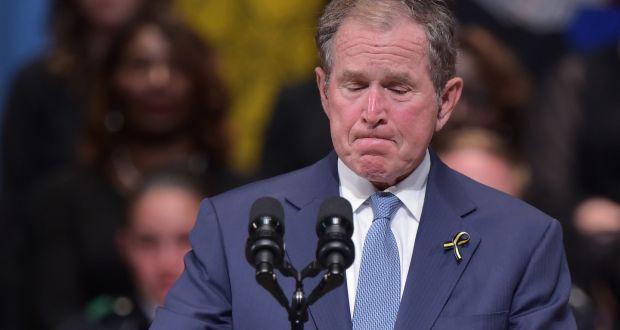 While Trump says bad things, President Bush was doing bad things. Though Trump crafted the horrific travel ban, which bars residents of six Muslim-majority countries from entering into the U.S., Bush began the Forever War in Afghanistan while deeming Iraq to be part of a so-called Axis of Evil.

Bush tried to prevent hatred against Muslims from spreading throughout the U.S. during the hawkish and frenzied warcries, but he failed.

Islamophobia ensnared the country, isolated the millions of Muslims in the U.S. and helped to form the populist sentiment against Islam that Trump brutally exploited in order to win the presidential election on a platform of questioning Obama’s faith and birthplace and instituting a Muslim travel ban.

Though the circumstances of 9/11 were extraordinary, Bush’s response, to push two indefinite wars and erode rights protections is equally, if not more astonishing.

In his first year in office, Bush invaded and occupied Afghanistan without a clear exit strategy—a tragic mistake for which the U.S. and Afghanistan are still paying. Tens of thousands of Afghani civilians died, billions of dollars were lost to abandoned infrastructure projects, and the U.S. still doesn't know how to make a graceful exit.

Not to sell himself short as being a hawk, Bush decided the U.S. needed another war. On Jan. 29, a few days after Bush’s one-year anniversary in office, he invented the ‘Axis of Evil,’ to describe Iran, Iraq, North Korea and other countries that sponsor terrorism. This speech helped to give the push to invade Iraq—a blunder that has killed over half a million civilians, displaced millions more. Iraq has still not recovered from the U.S. invasion and occupation.

Trump has made explicit to Americans how the U.S. government feels about Muslims, but many Muslims have already known that thanks to Bush's wars and failure to contain rampant Islamophobia.

The PATRIOT Act allows for mass surveillance of U.S. residents, permits wiretaps of phones with a warrant, and the indefinite detention of non-citizens.

In an interview with John Kiriakou, the ex-CIA officer who blew the whistle on the U.S.’ use of torture methods such as waterboarding, stressed that more Americans need to know exactly the impact of the PATRIOT Act: “It is illegal for [National Security Agency (NSA)] to spy on Americans. And not only is it illegal, but it’s a part of the NSA’s charter that it is not allowed to spy on Americans,” but thanks to the PATRIOT Act, the “NSA spies on all Americans.”

Also in response to 9/11, Bush established the notorious detention camp at Guantanamo Bay, Cuba, also known as Gitmo. Gitmo has become a symbol of the U.S.’ suspension of rights in its fight against ‘terror,’ by establishing a torture camp whereby uncharged suspects of extremism are subject to long periods of isolation, forced feeding, waterboarding and other cruel methods of detention and information extraction.

Trump talks up torture as an effective method of treating suspects of terrorism, but Bush wrote the modern playbook of how to actually implement it as a mainstay in the war against terror.

Beyond the PATRIOT Act’s immediate effects, it accelerated a trend in expanding discrete, unaccountable state power

Although torturing human beings is useless in producing meaningful information, it is incredibly effective at demonstrating a basic apathy towards preserving human dignity, but is also a great way to becoming an international villain.

What the International Community thinks of Bush and Trump

Trump garners almost no respect from any international leader or audience, and has backtracked U.S. participation in the Paris Agreement to combat climate change. But Bush, not far behind him, also pulled out of the Kyoto Protocol, another treaty aimed at combating climate change.

Bush also proved to be an unreliable international leader: part of his foreign policy doctrine was unabashed unilateralism. In other words, Bush had a tendency of going into other countries without any international support. Again, massive failure that promotes hasty and illegal wars which unilaterally fall on U.S. taxpayers. To this, at least Trump has no foreign policy doctrine to speak of.

All of this in a year and a few days. So far, Trump has perhaps made obvious how unpresidential the office of the presidency actually can be, but his first 100 days have not proven to be as catastrophic as Bush’s.

Trump Doesn't Know How to be President, and Why That Matters

Those claiming that Trump’s first year in office ranks among the worst may need to recalibrate their understanding of U.S. politics: with so much power invested in the presidency, any miscalculation or abuse can leave thousands of people dead and countries struggling.

Trump doesn’t even seem aware of how much power the presidency has, preferring to tweet outrageous comments rather than strike potentially harmful backroom deals. Bush, on the other hand, knew exactly what he could do as president, and embroiled much of the world in strife and disrepair as a result.