It’s not Just Trump: Many Senators Supported his Jerusalem Move

However, when it came to Trump isolating the U.S. from nearly all of its allies and potentially spelling an end to the U.S.’ role in brokering a peace between Israel and Palestine, Corker, who is the chairman of the Senate Committee on Foreign Relations, was overflowing with praise. “‘Today’s announcement recognizes what has been true for almost 70 years, namely that Jerusalem is Israel’s seat of government,’ Corker’s press announcement said.

Trump’s decision to recognize Jerusalem as the capital of Israel drew widespread protests and nearly universal condemnation, as it is widely seen that such recognition imperils the two-state solution between Israel and Palestine.

Turkey, Egypt, Saudi Arabia, Jordan, the UAE, Iran and Russia among others have all roundly denounced Trump’s decision.

In a thinly veiled critique of Trump’s decision, the U.N. Secretary-General Antonio Guterres spoke out, "in this moment of great anxiety, I want to make it clear: There is no alternative to the two-state solution. There is no Plan B.”

The E.U. also echoed the U.N.’s concerns: "The aspirations of both parties must be fulfilled, and a way must be found through negotiations to resolve the status of Jerusalem as the future capital of both states.

Many in the Middle East and elsewhere are now saying Trump’s announcement functionally spells the end for the U.S. to help negotiate peace between the two nations.

But many Senators in Congress, like Bob Corker, have given Trump their support and have lauded his decision as one ‘long overdue.’

For once in Trump’s tenure, he actually has enthusiastic, bipartisan support for a decision he has made, even if this decision goes against the will of the American people, hurts the U.S.’ reputation abroad, and undoes decades of careful work the U.S. has done in the region.

Sen. John Thune, R-SD spoke to The Intercept and seemed optimistic that an administration infamous for its lack of planning and constant internal chaos, had planned effectively for such a decision: “I assume they have worked that with Israelis and hopefully the region. My guess is there’s a lot of work that has gone in in advance of that move.”

Sen. Richard Shelby R-AL, in officially representing the United States, made his thoughts clear on the matter: “can’t be much more violence than what’s already there,” he shrugged. In other words, because the Middle East is essentially a black hole of violence and anarchy and completely void of any actual livelihood or humanity, the United States can do no harm in the region.

Most demonstrations have been peaceful, but several Palestinians have been killed and violent clashes have taken place outside the U.S.’ Embassy in Beirut. 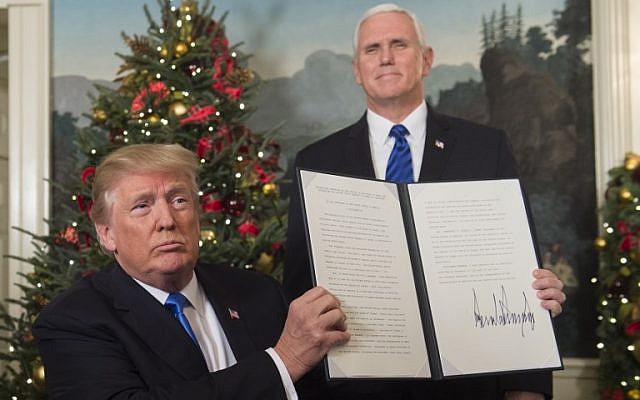 Many other Senators remained quiet on the issue, refusing to speak out against the move and the subsequent violence and diplomatic instability it has caused. Very few openly criticized Trump’s decision.

Elizabeth Warren, D-NY said she was concerned the move would make it harder to negotiate a peace deal in the region, and Bernie Sanders, D-VT shared her beliefs.

Sen. Dianne Feinstein, D-CA released perhaps the most unequivocal condemnation of Trump’s decision: “If you [Trump] break with this long tradition of bipartisan foreign policy, you’ll erode American credibility as an unbiased mediator, alienate us from our international partners--such as Jordan--and undermine any remaining hope for a two-state solution.”

U.S. Americans are also largely against the decision. In a poll conducted by the University of Maryland and released by the Brookings Institute, 63% of U.S. Americans reportedly disapprove of Trump’s decision, with 81% of Democrats and 44% of Republicans standing in opposition.

In the slow dismantling of the U.S.’ role in the Middle East, Trump appears to be largely backed by Congress, either explicitly or through silence.