Published July 7th, 2021 - 04:18 GMT
Palestinian artist Taqi Spateen poses for a photo before his mural depicting a sniper rifle underneath Jerusalem's Dome of the Rock facing a video camera wearing a press helmet and bulletproof vest labelled "stress", his latest creation on the theme of violence against journalists covering the Israeli-Palestinian conflict, on a section of Israel's controversial separation barrier in Bethlehem on June 30, 2021. Emmanuel DUNAND / AFP
Highlights
‘We are seeing the beginning of a police state being formed; we no longer know who is a friend or who is a foe’

Palestinian journalists staged a one-hour strike on Tuesday in protest against Palestinian security’s failure to protect their profession. 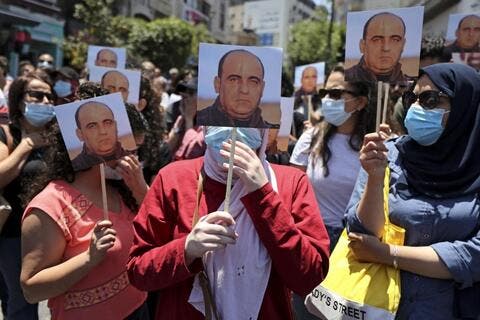 Omar Nazzal, a member of the Palestinian Journalist’s Syndicate, told Arab News that most radio, online and freelance journalists took part in the protest.

Since the year 2000, the israelis have shot & killed over 46 Palestinian journalists & no one has ever been held to account: it's condemnable pic.twitter.com/cZPh6BJnSg

“They stopped work for one hour to make it clear that Palestinian journalists will not accept the continuous attacks and restrictions that are being imposed. The aim is to silence us and they think that this chilling effect will stop us from working. They are wrong,” he said.

In its call for a work stoppage, the syndicate condemned Monday’s arrest of six journalists, warning that it contradicted pledges made by the prime minister.

“This morning Prime Minister Mohammad Shtayyeh pledged to honor freedom of expression and press, yet Palestinian security contradicted his statement,” it said.

Describing to Arab News what happened on Monday, Hind Shraydeh, a presenter at Watan TV, said: “When I heard about the arrest of my husband Abby Aboudi, I brought my children and father-in-law to the police station. I kept asking about my husband and I shouted demanding his freedom.”

As her voice grew louder, journalists began to film, and suddenly Hind found herself being attacked.

“I was pepper-sprayed and separated from my children as I was pulled into the police station,” she said.

She was later allowed to see her husband and was released without signing a pledge that police demanded she sign.

Moamar Orabi, director of the Watan TV website, told Arab News that he was among the journalists who were attacked on Monday as he was covering the protests.

“I was at the site near the Muqata (Palestinian presidential headquarters) and I was talking quietly with one of the local Palestinian security forces about the need for respect of law and protection of journalists,” he said. 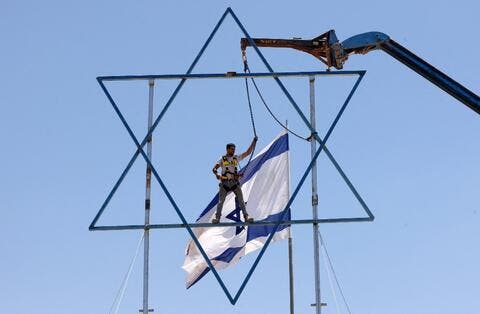 “Suddenly, a police unit arrived led by a person with a hood and he pointed to me telling his fellow security personnel that I am the instigator. They began beating me and at the same time, a large number of Palestinian protesters came to my aid and saved me from the unprovoked attack,” he added.

What is happening in Palestine is “very scary,” Orabi said. “We are seeing the beginning of a police state being formed; we no longer know who is a friend or who is a foe.”

Orabi, whose son has been imprisoned in an Israeli jail, said that Palestinians are fighting two battles for simple freedoms that are enjoyed elsewhere in the world. “I want to say it clearly that we deserve freedom and we need the rule of law to be applied to all, especially to our own leadership, so that we can carry out our work as journalists.”