Published September 22nd, 2022 - 11:58 GMT
Palestinian Authority President Mahmoud Abbas appear on hand with the rest of the Palestinian UN delegation. (Shutterstock/ File Photo)
On the sidelines of his participation in the presidential reception hosted by US President Joe Biden at the American Museum of Natural History in New York, last night, Mahmoud Abbas met with a number of world leaders and briefed them on the political developments in Palestine.

Great to see our President meet with the Palestinian President. 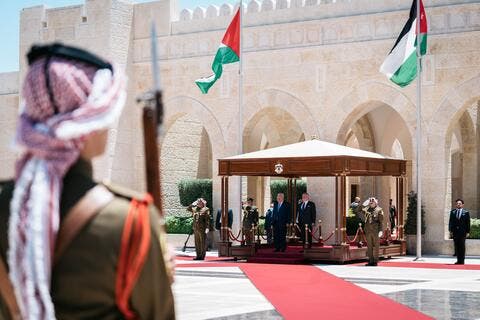 He reviewed the Israeli practices and measures against Islamic and Christian holy sites and the ongoing settlement expansion.

The President stressed the Palestinian position on the necessity of achieving a just and lasting peace in accordance with the United Nations resolutions leading to the establishment of the independent state of Palestine with East Jerusalem as its capital on the 1967 borders.

He also briefed the world leaders on the latest developments in the political process and the international efforts exerted to revive it, in addition to the overall situation and developments in the Middle East, and bilateral relations with Palestine.

The meetings were attended by Minister of Foreign Affairs and Expatriates Riyad Malki and the Permanent Representative of Palestine to the United Nations Riyad Mansour.