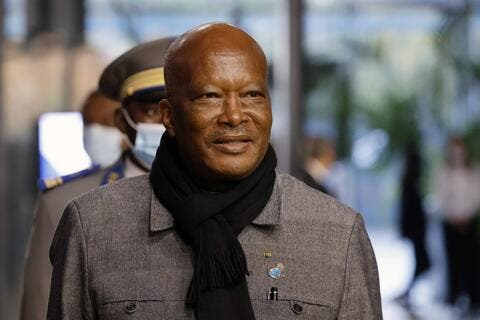 In his handwritten letter addressed to the new junta administration, Roch Marc Christian Kabore wrote that after the events that took place since Sunday, he decided to resign from all his duties for the best interest of society.

The letter was shared by many accounts on social media.

Military in Burkina Faso says it has seized power in a coup https://t.co/c4jMwNqWNz

Mutinous soldiers declared a coup Monday, announcing a series of measures, including the closure of the West African country's borders.

Lieut. Col. Paul Henri Sandaogo Damiba went on live television with other members of the group, which called itself the Patriotic Movement for Safeguard and Restoration, saying they decided to "put an end to the power" of President Kabore due to the "continuous deterioration of the security situation."

The declaration followed reports earlier in the day of Kabore's detention at a military camp by a group of soldiers, with the president calling on the officers to surrender in the best interests of the nation.

According to security sources and multiple media reports, Kabore was detained after gunfire was heard in some barracks in the capital Ouagadougou on Sunday.

A group of people also took to the streets and attacked the offices of the ruling People's Movement for Progress party.

A nationwide curfew was declared from 8.00 p.m. to 5.30 a.m. local time Monday before the coup was confirmed, and educational activities were suspended for two days.