Published April 20th, 2021 - 07:33 GMT
In this file photo taken on December 26, 2019 Russian opposition leader Alexei Navalny stands near law enforcement agents in a hallway of a business centre, which houses the office of his Anti-Corruption Foundation (FBK), in Moscow. Russian prosecutors on April 16, 2021 asked a Moscow court to designate the network of regional offices of jailed Kremlin critic Alexei Navalny and his Anti-Corruption Foundation (FBK) as "extremist organisations". Dimitar DILKOFF / AFP
Highlights
US threats of “consequences” over the health condition of opposition figure Navalny

Russia has brushed off US threats of “consequences” over the health condition of opposition figure Alexei Navalny, warning the West against making “provocative” calls for street rallies in his support. 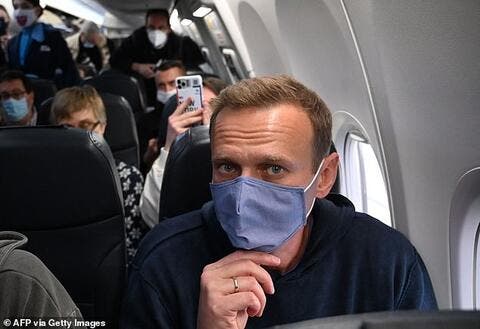 US National security adviser Jake Sullivan said on Sunday that Washington has “communicated (to Russia) that there will be consequences if Navalny dies.”

President Vladimir Putin’s spokesman Dmitry Peskov said on Monday that the Kremlin did not have any reaction to Washington’s threats.

Jailed Russian opposition leader Alexey Navalny’s condition has worsened sharply amid a hunger strike and may die in “a matter of days,” his spokeswoman says https://t.co/mqlXCy9a5T

“We have no reaction to such statements made by representatives of other states," he said.

Peskov also said that the Kremlin will not take into consideration what the West calls “concerns” over Navalny’s health conditions.

"Health conditions of convicts in Russia cannot and should not be of any interest to them [Western countries]," he added.

Navalny, who is serving a 2½-year prison sentence after being convicted of violating parole conditions, has allegedly been on hunger strike for three weeks over what he describes as improper treatment by prison guards.

He was transferred to a hospital within the prison system, prison authorities said Monday.

They said his health condition has been “assessed as satisfactory” and a doctor has been examining him every day.

Navalny has also consented to being prescribed “vitamin therapy,” they said.

This has prompted calls for street rallies to demand Navalny’s release.

The Russian Interior Ministry warned people against taking part in unauthorized street rallies, which Peskov said are being supported from abroad.

“Importantly, such provocative calls are coming from outside Russia again,” he said. “They come from some people who live abroad.”

Peskov said he does not know "whether anyone in Russian regions and cities has ever filed a request for any rallies."

“In case any unauthorized rallies are initiated, they will be automatically considered as illegal and police will do what they must under Russian law," he warned.

The spokesman also said that President Vladimir Putin was receiving reports about letters from domestic and foreign figures concerning Navalny’s health conditions, but said that such issues were not within the president’s purview.

Putin "cannot take any actions regarding the monitoring of an inmate’s health” since this is the duty of the Federal Penitentiary Service and that there are certain procedures for that, Peskov said.

“Undoubtedly, all these procedures in the prison system are strictly regulated, everything is implemented there in compliance with the law," he added.

Peskov also said that "the president is busy getting ready for his Address to the Federal Assembly  with the annual message," on Wednesday.

Navalny hit the headlines when he fell into a coma while aboard a domestic flight from Siberia to Moscow in August last year.

His associates and the West immediately accused Moscow of having poisoned him with a nerve agent and took him to a hospital in Berlin for treatment.

FM @Haavisto: Together with the EU, deeply concerned about the alarming news about Alexei Navalny’s condition. He must be granted access to the medical treatment he needs. Russian authorities are responsible for his health and well-being. https://t.co/YIKDej2yAh

The opposition figure was arrested upon his arrival in Moscow in January.

The US and the European Union called for his release and imposed a series of sanctions on Russia over his detention and alleged poisoning.

Last month, the administration of President Joe Biden announced a series of measures that target seven senior members of the Russian government and added 14 entities to the Department of Commerce's blacklist, mirroring sanctions imposed earlier by the European Union and Britain over the Navalny case.

In the past six years or so, the US has imposed waves of sanctions against Russia, including over the alleged interference in its 2016 presidential elections.

The lates sanctions are the first part of several steps Biden plans to take against Russia. 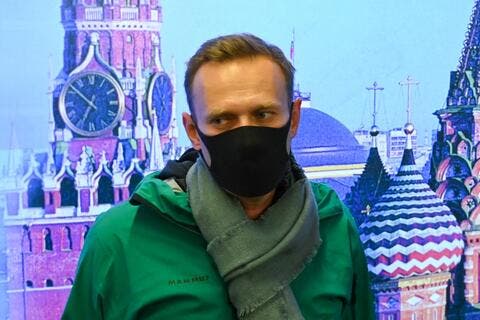 Relations between the White House and the Kremlin hit a new low last month after Biden said in an interview that he believed Putin was a “killer” and that the Russian president would have to “pay a price” for interference in US elections.

An American journalist told PressTV last week that Biden is determined to wipe out any chance of improving diplomatic relations with Russia through sanctions.