Published March 20th, 2022 - 07:30 GMT
Protesters hold placards during a demonstration against the Russian invasion of Ukraine next to the Swiss House of Parliament in Bern, on March 19, 2022. (Photo by Fabrice COFFRINI / AFP)

A senior Russian official has urged the United States and NATO to stop sending weapons and mercenaries to Ukraine, blaming Washington and its Western allies for a delay in efforts to resolve the conflict. 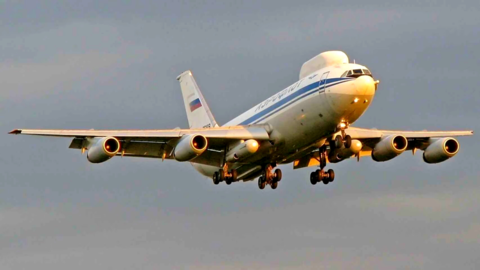 Doomsday Plane in USA and Russia: The Noah’s Ark of Our Time?

Vyacheslav Volodin, chairman of the lower house of the Russian Parliament, made the remarks in a post on his Telegram channel on Saturday, after NATO countries decided to continue weapons delivery to Ukraine at an emergency meeting of the NATO defense ministers in Brussels.

The US and it's vassal states/NATO are being criminally reckless in their on-going eastward expansion. We may all suffer the consequences.
Russia’s State Duma speaker has urged the US and NATO to stop sending weapons and mercenaries to Ukraine. https://t.co/uVWsFtVrJV

“Weapons and ammunition are supplied by NATO countries. Mercenaries who fill the ranks of (Ukraine’s) nationalist battalions are recruited in the countries of the North Atlantic Alliance with the consent of their leadership,” Volodin said.

“So when (US President Joe) Biden and his NATO colleagues call for peace, they must first start with themselves. It is their fault that the settlement of the situation in Ukraine, its demilitarization and denazification are being delayed. They don’t want Ukraine to become an independent and neutral state.”

The State Duma speaker said: “if the US and other Western countries really want peace, it would be right for them to spend money on humanitarian assistance to the people rather than on military supplies.”

Volodin called on the United Nations to act and drop double standards if it wants peace to prevail. “If you want peace to be established as soon as possible, make immediate decisions. The US and NATO countries must stop sending weapons and mercenaries to Ukraine.”

Volodin said Washington and Brussels are directly responsible for the death of civilians in Ukraine and the outflow of refugees. He accused Ukrainian nationalists of using civilians as human shields.

On February 24, Russian President Vladimir Putin ordered a “special military operation” in Ukraine. The conflict has provoked a unanimous response from Western countries, which have imposed a long list of sanctions on Moscow.

Russia has said it will halt the operation instantly if Kyiv meets certain demands, including that Ukraine never joins NATO.

On March 16, US President Joe Biden announced an additional $800 million in security assistance to Ukraine, with the new package including drones, anti-armor, and anti-aircraft systems. “More will be coming as we source additional stocks of equipment that... we are ready to transfer,” he said.

NATO Secretary-General Jens Stoltenberg said at a news conference after the emergency meeting of the defense ministers that they had agreed to task military commanders to draw up plans for new ways to deter Russia. Those plans include deploying more troops and “more pre-positioned equipment and supplies” on land, strengthening “integrated air and missile defense systems,” and deploying “sea carrier strike groups, submarines, and significant numbers of combat ships on a permanent basis.”

“The State Duma speaker said ‘if the US and other Western countries really want peace, it would be right for them to spend money on humanitarian assistance to the people rather than on military supplies.’” https://t.co/ni7Plt4443 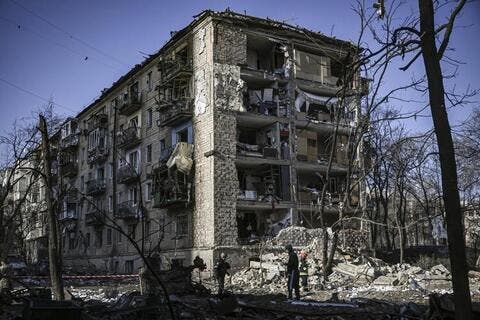 The defense ministers also emphasized the importance of continuing to arm and fund Ukraine in its battle to hold back Russian forces and give impetus to the ongoing negotiations for a peaceful solution, Stoltenberg said.

Ukraine is not a member of NATO, and the military alliance, therefore, has no formal obligation to intervene to stop the war. But Ukraine is bordered by four NATO members: Hungary, Poland, Romania, and Slovakia. Further north, Russia borders the three Baltic states, each of which is NATO members: Estonia, Latvia, and Lithuania.