Saudi's Future Defence Plans Are Massive and Will Involve Beijing

Sustained political pressure over the murder of Saudi journalist Jamal Khashoggi and the ongoing humanitarian crisis in Yemen has turned what the Kingdom had long seen as an all-weather ally into a partner subject to increasing conditions of engagement.

This shift closely mirrors developments in the European Union and UK. Many EU states have stopped granting export licences and the UK appeals court recently obliged the government to reconsider the basis on which it has granted export licences to Saudi Arabia.

Though President Donald Trump moved to veto congressional decisions over arms sales, policy makers in Saudi Arabia have increasingly moved to reduce their dependence on American and European arms sales in recent months.

Two developments in this regard should prove interesting to defence observers. Firstly, according to Stratfor, an American geopolitical intelligence advisory, arms ties between Riyadh and Beijing have increased significantly in recent months.

Saudi Arabia has reportedly significantly expanded its ballistic missile program with the help of China. Saudi Arabia has long been barred from purchasing ballistic missiles from the US under regulations set forth by the 1987 Missile Technology Control Regime, an informal pact aimed at preventing the sale of rockets capable of carrying weapons of mass destruction.

Yet as American policy makers have come under increasing pressure over relations with the Kingdom and Saudi officials have sought to signal military strength to its regional foes, primarily Iran, a new relationship of convenience has been established with China, a power keen to expand its influence in an increasingly contested region.

a new relationship of convenience has been established with China, a power keen to expand its influence in an increasingly contested region.

Saudi efforts to build an indigenous industry for the production of arms may prove a more important long-term development. In late 2017, the Kingdom formed Saudi Arabian Military Industries (SAMI), a state-owned company tasked with the development of high-tech armaments and the provision of defence electronics and munitions to aid internal and external security on land and sea and in the air.

The company, owned by the country’s Sovereign Wealth Fund hopes to be among the top 25 aerospace and defence companies in the world by 2030, and hopes that its negotiation of ‘localisation’ contracts with foreign defence companies, which would oblige that 50% of work on armaments acquired by the Kingdom be carried out domestically, will bring in 40,000 direct jobs and 100,000 direct jobs over the next decade.

In addition, new government agency, the General Authority for Military Industries, has been established to coordinate research and development on military technology.

It is hoped that the development of an indigenous defence industry, which has forged lucrative recent partnerships with the world’s leading defence and aerospace companies including BAE Systems, Lockheed Martin, Raytheon and Boeing, will ween the Kingdom off dependence on foreign arms, giving it more room to manoeuvre in relation to its increasingly autonomous foreign policy decision making. According to the Stockholm International Peace Research, Saudi Arabia’s voracious appetite for high tech weaponry cost it 13 Billion JOD between 2010-2017.

According to the Stockholm International Peace Research, Saudi Arabia’s voracious appetite for high tech weaponry cost it 13 Billion JOD between 2010-2017.

A desire to alleviate such costs and wealth the increasing uncertainty associated with arms sales from the USA and UK, historically Saudi Arabia’s most significant defence partners, have encouraged SAMI’s ambitious agenda. 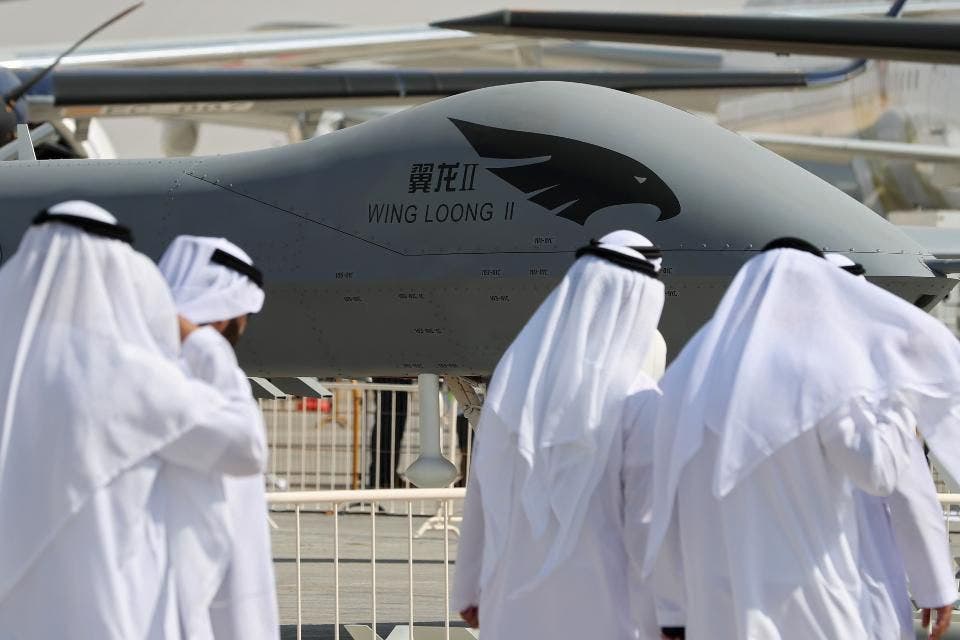 Visitors to the Dubai Airshow walk past a Chinese-made Wing Loong II drone on November 14, 2017, in the United Arab Emirates. The same drones have reportedly been sold to Riyadh for operation in Yemen. /AFP

SAMI has employed a former head of Rheinmetall, a leading European defence contractor as its CEO and pledged billions towards researching innovative military technologies. As well as allowing Saudi Arabia to decrease its dependence on foreign arms companies and governments and the conditions that come with such a position, developing an arms industry may provide other benefits to the Kingdom.

‘with plenty of cash at hand, setting up an arms industry should also be seen as a prestige project, but one that can also help foster Saudi foreign policy interests, for example, to supply weapons to regional powers they want to support’.
- Frank Slijper

Frank Slijper, the Programme Leader on the Arms Trade at PAX, a Dutch NGO, ‘with plenty of cash at hand, setting up an arms industry should also be seen as a prestige project, but one that can also help foster Saudi foreign policy interests, for example, to supply weapons to regional powers they want to support’.

Whilst Saudi forays into arms production should be watched with significant interest and caution internationally there remain a number of important barriers to the development of a competitive industry in the Kingdom. Whilst ambition and finance are not an issue, technological innovation and access to skilled labour are.

The appointment of Andreas Schwer, a German citizen as SAMI’s CEO attests to a shortage of domestic candidates to direct the emerging industry. Under localisation rules, foreign defence contractors operating in Saudi Arabia have been forced to provide in house training, causing delays and adding costs.

Under localisation rules, foreign defence contractors operating in Saudi Arabia have been forced to provide in house training, causing delays and adding costs.

Logistical and training problems abound in a state with a low-skilled workforce and low levels of technical education attainment. Mr Slijper notes that the Kingdom will be playing catch up regionally - the development of military technology industries has been a more long-term element of the United Arab Emirates’ plans for economic diversification.

Though Saudi Arabia may develop a viable small arms and armoured vehicles industry, competing companies in the neighbourhood including in Pakistan, Turkey, Egypt and Sudan minimise the benefits that can be derived from such moves.

In regard to more technologically complex systems, Saudi producers, lacking domestic expertise and trained personnel, are likely to remain dependent on western arms companies for the foreseeable future. As Mr Slijper concludes, Saudi Arabia and its state-owned defence companies ‘will be a relatively minor player for years to come’.

Saudi attempts at further securitisation and weapons acquisition should be the cause of international alarm.

Given its aggressive diplomatic posturing in relation to Iran, the ongoing suffering in Yemen, and its penchant for violence as strategy of foreign policy, Saudi attempts at further securitisation and weapons acquisition should be the cause of international alarm.

For now, SAMI looks more likely to enhance the domestic standing of the Saudi regime than its security credentials.

SFA Presents Step Together, the First Walk-Run Event in a Series