The Saudi suspect arrested in France with links to journalist Jamal Khashoggi's murder was released on Wednesday after identity verification confirmed he was the wrong man, a senior judicial officer announced. 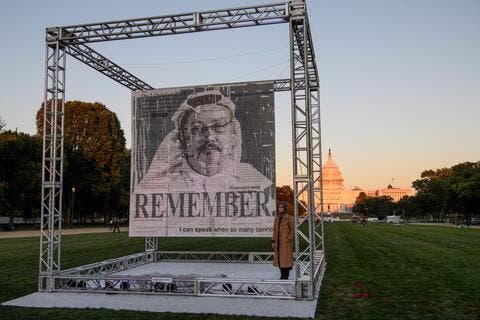 France frees a Saudi man who was detained in Paris after being mistaken for one of journalist Jamal Khashoggi's killershttps://t.co/xcZor02YGJ

Remy Heitz, the attorney general of Paris, attested the case was of mistaken identity and the man arrested was a namesake of the suspect wanted by Turkey, news outlet BFMTV reported.

"Thorough checks on the identity of this person made it possible to establish that the warrant did not apply to him and he was released," the report quoting Heitz added.

French authorities on Tuesday detained a 33-year-old man named Khaled Aedh Al-Otaibi at Paris's Charles de Gaulle airport while he was boarding a plane to Riyadh. He was arrested on the basis of an Interpol warrant issued by the Turkish judicial authorities on Nov. 5, 2018 including the same name as one of the suspects in Khashoggi's murder.

The Saudi Foreign Affairs Ministry in a statement released late on Tuesday evening demanded immediate release of the man as the "person arrested has nothing to do with the case in question."

It denied media reports on the arrest as "incorrect" and maintained that all those involved in the "heinous murder" are currently serving sentences in Saudi Arabia.

Saudi journalist Khashoggi was killed and dismembered by a group of Saudi operatives shortly after he entered the country's consulate in Istanbul in October 2018.

Riyadh initially denied any role in his death but later blamed it on what it said was a botched rendition operation.

How to Buy Bitcoin With Cash or Debit/Credit Card