Shireen Abu Akleh: Sweeping a Murder Under The Carpet

Published July 6th, 2022 - 10:48 GMT
woman walks past a mural depicting slain Al Jazeera journalist Shireen Abu Akleh, who was killed while covering an Israeli army raid in Jenin in May, drawn along Israel's controversial separation barrier in the biblical city of Bethlehem in the occupied West Bank on July 6, 2022. (Photo by AHMAD GHARABLI / AFP)
Highlights
Palestinian rights advocates have censured the White House’s response to the Israeli

Palestinian rights advocates have censured the White House’s response to the Israeli killing of Palestinian Journalist Shireen Abu Akleh as an act of “sweeping the incident under the rug” to calm the tensions ahead of President Joe Biden’s visit to Israel later this month. 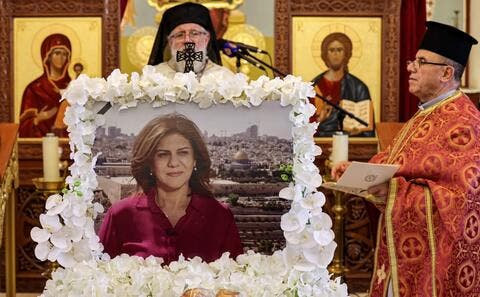 Maya Berry, executive director of the Arab American Institute (AAI), a Washington-based think-tank, told Al Jazeera that Washington appears to have wanted to “tie up loose ends” before Biden’s visit.

Yousef Munayyer, a Palestinian-American analyst and senior fellow at the Arab Center Washington DC, also said that Washington wanted to sweep the incident under the rug “as swiftly and as neatly as possible.”

#ShireenAbuAkleh
Abu Akleh bullet test inconclusive but IDF likely responsible, US claims.
The test was reportedly conducted Sunday night at the US embassy in Jerusalem, with American and Israeli representatives present, according to Jerusalem Post.

The US State Department announced in a long-overdue statement on Monday that it “could not reach a definitive conclusion” regarding the origin of the bullet that killed Abu Akleh after “an extremely detailed forensic analysis.”

“In addition to the forensic and ballistic analysis, the [US Security Coordinator] was granted full access to both Israel Defense Forces (IDF) and Palestinian Authority (PA) investigations over the last several weeks. By summarizing both investigations, the USSC concluded that gunfire from IDF positions was likely responsible for the death of Shireen Abu Akleh,” read the statement issued by spokesman Ned Price.

Still, Price said that the USSC found “no reason” to believe that the killing was intentional, adding that it was the result of “tragic circumstances” during an Israeli military operation against factions of the Palestinian Islamic Jihad movement.

Last week, the Biden administration offered to examine the bullet that killed Abu Akleh after the Palestinian Authority (PA) had refused to hand it over to Israel. Palestinian officials later said they gave the bullet to US experts after receiving guarantees that Israel would not be involved in the investigation.

“Ballistic experts determined the bullet was badly damaged, which prevented a clear conclusion,” the US State Department spokesman said in his statement.

“The State Department’s statement was an effort to split the difference between both sides,” Munayyer told Al Jazeera. “And instead of coming down on the side of truth, they came down on the side of equivocation. They really had an opportunity to take a stand and do the right thing, but they clearly failed to do so.”

Multiple investigations by independent organizations and media outlets have already concluded that Abu Akleh was deliberately shot by Israeli forces.

Video footage of the incident shows that there were no armed Palestinians in the area where Abu Akleh was killed and that she and her colleagues from other outlets were in identifiable press gear.

Berry expressed “complete disappointment” with the Biden administration’s response to the killing “from day one”. She stressed that the US is not an impartial player in the Israeli-Palestinian conflict.

Rather, she went on, Washington enables Israeli abuses with “unequivocal blind support, both financial and political.”

Shatha Hanaysha, a Palestinian journalist who was beside Abu Akleh when she was killed, recounted the harrowing incident in an exclusive interview with Press TV, during which she said, “I still cannot fathom why it happened, why Shireen was killed, why they tried to kill us.”

“When we went to that street that day to cover the Israeli military raid, we saw Israeli military vehicles approaching and they also noticed our presence,” she remarked, dismissing Israeli claims that it could have been Palestinian fire.

In a viral video, immediately after Abu Akleh was shot, Hanaysha can be seen in a crouching position next to the veteran Al Jazeera Arabic journalist, frightened, screaming, and crying.

“I know who shot Shireen and who tried to kill the rest of us, they were Israeli troops and not anyone else,” the 29-year-old reporter told Press TV. “It was not at all a case of mistaken identity.”