Published October 14th, 2021 - 10:18 GMT
A fighter from the Amal movement takes aim during clashes in the area of Tayouneh, in the southern suburb of the capital Beirut, on October 14, 2021. (Photo by ANWAR AMRO / AFP)
Highlights
Hezbollah and Amal called for the protest in an attempt to silence Judge Tarek Bitar

Lebanon's army forces warned is threatening to shoot anyone carrying a firearm following armed clashes during a protest against the Beirut port blast investigator. 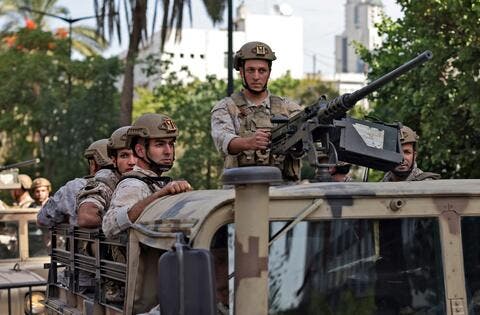 Several casualties feared after an armed clash in #Beirut during a protest against the judge heading the Beirut Port blast investigation. #Lebanon

Multiple casualties were reported with four dead according to a military source and more than 20 wounded after violence erupted Thursday in the vicinity of a protest against Judge Tarek Bitar, local media said. Reports suggest the initial shooting took place in the Tayouneh neighborhood of Beirut.

"While protesters were going to the Justice Palace they were fired at in the Tayounah area," an army statement said.

Prime Minister Najib Mikati called for calm and the arrest of "those responsible for the violations that led to injuries."

The demonstration, called for by the Shiite duo of Hezbollah and Amal Movement, was scheduled to take place in front of the Justice Palace in the capital of Beirut.