Published July 13th, 2022 - 06:27 GMT
A man waves Sri Lanka's national flag outside presidential secretariat in Colombo on July 13, 2022. Sri Lanka is mired in a deep political and economic crisis, and on July 13, the country's president flew out of the country days after a huge crowd of protesters stormed his residence. (Photo by Arun SANKAR / AFP)

Sri Lanka's Prime Minister Ranil Wickremesinghe, the acting president, declared a state of emergency across the country following the crisis that hit Sri Lanka resulting in the fleeing of former president Gotabaya Rajapaksa, the PM's office announced on Wednesday. 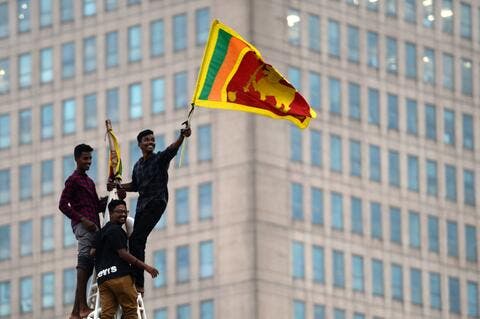 Chaos in Sri Lanka After President Flees to The Maldives

According to Sri Lanka's local media citing the PM's office, Wickremesinghe has announced a curfew in the Western Province and Emergency Law across the country amid continuous protests that forced the ex-president to escape to the Maldives.

BREAKING: Prime Minister @RW_UNP has ordered the imposing of a curfew in the Western Province today & Emergency Law islandwide. This comes after protesters demanding his resignation were tear gassed near his office this morning. #lka

Local officials revealed that Sri Lanka's embattled President Gotabaya Rajapaksa took a military jet, along with his wife and a bodyguard, early Wednesday to escape angry demonstrators who stormed the presidential palace in Colombo on Saturday and also set fire to the prime minister’s home.

Moreover, the Prime Minister said that he will immediately resign once an all-party government is officially formed.