The Arabs at the Margins of Iran: Why is There a New Wave of Ahwazi Protests? 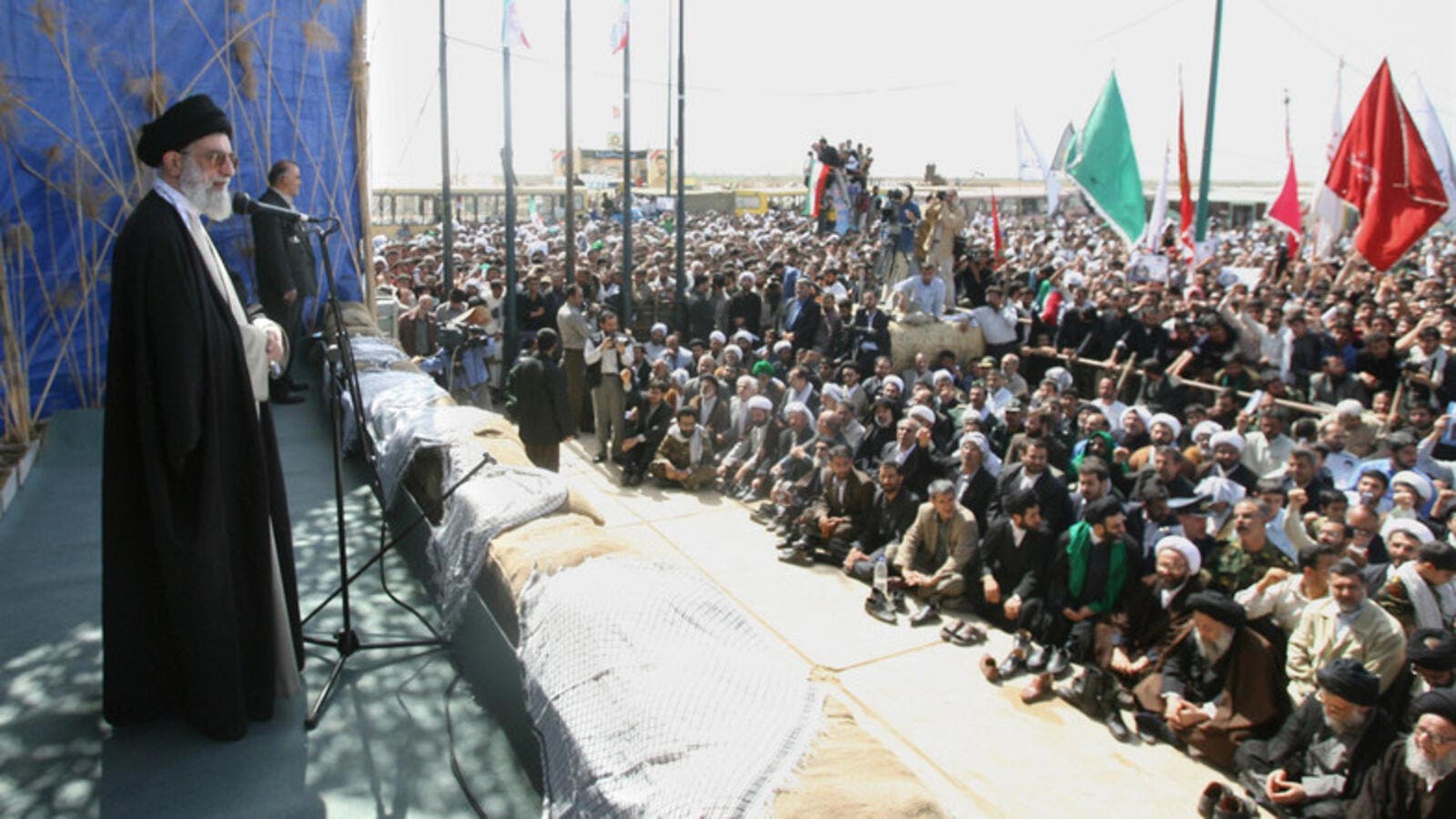 Ayatollah Ali Khamenei speaks to Ahwazi Arabs during a visit to Dehlavieh in the province of Khuzestan, on 25 March 2006. (AFP)

The Islamic Republic of Iran was always going to have a difficult time building a unified national identity. The 1979 Revolution intended to put Islam at the core of the nation’s soul. But Iran also needed to distinguish itself from its neighbouring Muslim enemies. It needed to differentiate itself as Shi’a, and as Persian, from its Sunni Arab rivals.

In that regard, the Islamic Republic could build on the work of previous Iranian nationalists. Qajar-era intellectuals in the late nineteenth century are credited with being the first to imagine an Iranian nation, in the mould of European nation-states. For many of them, the “authentic” character of Iran was to be found in its ancient pre-Islamic period, an idealised golden age in which prosperity, knowledge and justice reportedly abounded.

By contrast, the Arab conquest was seen as a hindrance to Iran, and the fanatical Arab practice of Islam stagnated Persian potential. Under the Shah’s rule up until 1979, the conquering Persian King Cyrus the Great was lionised in Iranian nationalism.

There was thus plenty for the newly-established Islamic Republic to work with when distinguishing Iranian from Arab identity. But determining what Iranians were, rather than what they were not, was trickier. Though the new rulers were averse to all non-Islamic influences, also knew the dangers of clamping down too hard on dearly-held tenets of Iranian culture.

They were left with the task of incorporating widespread Zoroastrian influences and other aspects of folk culture into a fundamentalist Islamic doctrine. The Zoroastrian festival of Nowruz was tailored in the national school curriculum throughout the 1980s. It was given a new Islamic character, and celebrated as part of the nearly-coinciding celebrations commemorating the Islamic Revolution and the establishment of the Republic.

In some ways then, the Islamic Republic proved themselves adept at balancing competing aspects of Iranian national identity. In others they have been far less successful. And tragically, this is most obvious when it comes to dealing with Iran’s ethnic minorities. Dr Alam Saleh, a lecturer in Middle Eastern Politics at Lancaster University and an expert in Iranian ethnic politics, told Al Bawaba:

“Iran’s national identity making project has always been struggling in defining what means to be an Iranian. As a very multiethnic and multi-religious country, Iranian elites failed to establish a coherent and inclusive national identity.

Minorities, be it ethnic or religious or both, thus have been neglected by politicians as well as the elites throughout the 20th century. The five major ethnic groups in Iran; Arabs, Azeris, Kurds, Bakhshi’s, and Turkmen, have been insulted and neglected in one way or another since 1925, the emergence of modern Iran. This is particularly important when it comes to the Arabs.”

As much is clear from the fresh series of protests that have rocked the city of Ahwaz, the capital of Khuzestan Province in south-western Iran, through early April.

These events are the latest in a string of upsets between Ahwaz’s inhabitants and Tehran. This area, known as Al-Ahwaz, is home to the Ahwazi Arabs, an Arab ethnic minority that has suffered grimly as a result of prejudices against them. Within the myriad struggles of discontent in Iran, Ahwazi Arabs have forged their own record of protest, but have paid dearly for their actions.

In December 2017, during the mass protests against economic hardship across the country, the Ahwazis held their own demonstrations against government plans to divert more water from Ahwaz to central Iran. This was despite the fact that the Ahwaz area suffers from drought.

There is also widespread reporting of land grabs. In 2005, there was a three-day uprising in Ahwaz when a letter (thought by many to be a forgery) supposedly from an Iranian minister came to light, which detailed plans to grab Ahwazi Arab land and redistribute it to ethnic Persians. This exacerbated the activities of Arab separatists, a number of whom were hanged the following year after they were apparently involved in a bombing campaign.

Nowruz but no Arab dolls!

The latest catalyst for unrest was a particularly undignified one. On the second day of this year’s Nowruz celebrations, Iran’s Channel 2 aired a documentary for children that purportedly showcased the diversity of Iran’s people, and featured dolls wearing the traditional costumes of all its ethnic groups.

However, there were no dolls and no mention for the country’s Ahwazi Arabs, who number between five and eight million. Initially, they launched an online campaign protesting the program, but to no avail. A few days later, Ahwazis scheduled a protest outside the offices of Iran’s broadcasting corporation, demanding an apology for the omission.

There is a widespread suspicion among the Ahwazi that their absence from the program was not an honest mistake, but a continuation of the policy described in the controversial 2005 letter – a policy of erasing Ahwazi identity from Iran’s national landscape. The government’s response to these protests will do little to allay their fears. According to Ahwazi activist websites, almost a hundred Iranian Arabs have been imprisoned in several cities across the country, and Ahwazis are experiencing raids in their homes.

All Iranian minority ethnicities have their challenges. But Iranian Arabs are particularly vulnerable, given that their identity is often conflated with Iran’s foreign adversaries. This is despite the majority of Ahwazis siding with Iran during the Iran-Iraq War, even as Saddam Hussein was courting their favour to try and turn them against Tehran. Dr Saleh added:

“The anti-Arab sentiment is very strong among the Iranians, and such sentiment is strengthened considering the current political situation in the Middle East; that being Iran’s rise in influence in the region, and also regional rivalry which invites powers to have an interest in Iran’s internal issues.

Tehran, more than ever, needs to keep its people happy, regardless of their ethnic background. Should the ethnic dissatisfaction coincide with the general disenchanted amongst the Iranians, Tehran may encounter a serious security challenges internally. Now elites in Tehran need to revisit their understanding of what Iran is and what it means to be an Iranian. The earlier they do the better.”

This wave of arrests has not stopped the Ahwazi protests – it has energised more of them. Tehran is needlessly undermining its own security for an identity-based campaign against an ethnic minority. It is further tainting the regime’s already dismal human rights record, worsening its international image, at a time when it is particularly vulnerable to American and Israeli hostility. If the repression of the protests continues and the publicity around them grows, the Iranian government may as well start writing speeches for Iran hawks.

Moreover, it is playing into the hands of the (previously very small) Ahwazi secessionist efforts. Tehran has previously shown that it is able to compromise the national character for political gain. Unless it is prepared to cut off its nose to spite its face, it should quickly find a way to do that again, and accept Ahwazi Arabs as equal Iranian citizens.