Published May 3rd, 2022 - 05:48 GMT
Iranian women lift mobile phones displaying Koran verses during a student rally in front of the embassy of Sweden in Tehran, on April 18, 2022, to protest a Swedish far-right group's plan to burn Korans. (Photo by ATTA KENARE / AFP)

The leader of the far-right Danish party Stram Kurs (Hard Line) claimed that he burned another copy of the Holy Quran on Saturday. 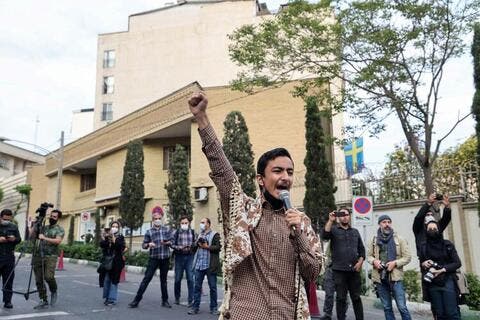 Taking to social media, Rasmus Paludan announced that he burned the Muslim holy book in front of Raslatt Mosque in Sweden’s southern city of Jonkoping despite Swedish police not allowing it.

Swedish police rejected Paludan's application for permission for a demonstration to burn the Muslim holy book on May 1, coinciding the World Labor Day across Sweden.

Meanwhile, a group of people in Malmo protested Paludan’s provocation of burning the Holy Quran in various Swedish cities during the Easter holiday.

Last week, about 500 people attended the protest organized by the Nyans in front of the country’s parliament in the capital Stockholm.

The protesters were holding banners that read "Stop the burning of the Holy Quran" and "Stop insulting Muslims".

On April 14, Paludan burned a copy of the Muslim holy book in Sweden's southern city of Linkoping. He also threatened to burn copies of the holy book during further rallies.

Earlier this month, the Turkish Foreign Ministry condemned the incident and described it as a provocation against Islam. 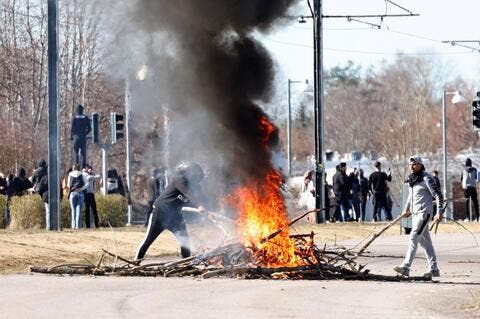 Arab Governments Condemn the Burning of The Quran in Sweden

10 people have been injured in violence in Sweden's Norrköping & Linköping today. Easter Weekend has been marred with violence as Muslims are protesting as a reaction to Danish far-right leader's call to hold a meeting, that often ends up with Koran burning. Hate breeds Hate!

“In the holy month of Ramadan, we once again condemn in the strongest possible terms the attacks and provocations against Islam, Muslims, the Quran, and places of worship in different parts of the world,” said a statement issued by the Turkish Foreign Ministry.

“The vile attacks on our holy book, the Quran, in Sweden have shown that the lessons of the past have not been learned, that there is still hesitancy to prevent Islamophobic and racist provocative acts, and that hate crimes are openly and overtly tolerated under the guise of freedom of expression,” it added.