Published September 16th, 2021 - 10:24 GMT
A veiled student speaks to a gathering of female students before a pro-Taliban rally at the Shaheed Rabbani Education University in Kabul on September 11, 2021. (Photo by Aamir QURESHI / AFP)

There was terror in her voice. Although Marjana (not her real name) was inside her home, she whispered when narrating her story. 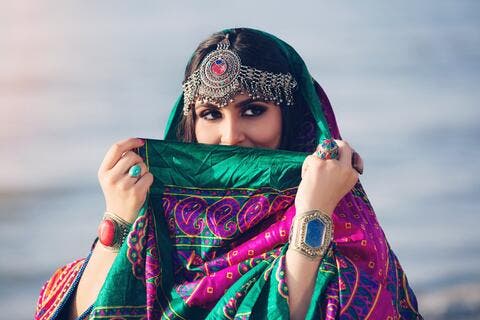 “We were handed black robes with veils that covered our faces completely. Some of them were already wearing it,” she said.

On September 11, several dozen women wearing black robes with veils and gloves were gathered in the lecture theater of the Shaheed Rabbani Education University in Kabul, where they held signs in support of the Taliban.

A professor who teaches in this university told me that all women professors are told to stay at home.
While holding this gathering, the Taliban denied women professor entry to the stadium and not a single professor was allowed to attend the gathering. https://t.co/HtgBmfXruu

But as images of those women emerged on social media, many were skeptical of the rally.

One of the many reasons included the presence of Taliban fighters alongside the demonstrators compared to previous anti-Taliban protests that saw a much harsher crackdown on women where they were met with violence.

Afghan journalists were also brutally beaten for covering those protests but invited to cover the pro-Taliban demonstrations.

Many Afghans were taken aback by the style of the burqa (a garment worn to cover the whole body from head to feet) worn by the participants as well.

The black robes with gloves and veils that covered their faces — including their eyes — is seen as a foreign concept to Afghans who are used to the blue-coloured Burqa, also referred to as the ‘shuttlecock burqa’, native to Afghanistan.

The blue burqa is a single piece of cloth that covers the entire body, including the face with a mesh panel on the eyes, compared to the Arab-influenced black burqa that is in three pieces: the robe, the head covering and the veil.

After interviewing several women who were present at the demonstrations, who only spoke on the condition of anonymity, TRT World has learnt that many were forced to participate by the group.

“They gave us black burqas to cover ourselves, including our faces. When I said no, some of them started shouting at me. In short we were forcibly made to wear those burqas and asked us to sit down in the theater,” another woman said.

“Underneath that black burqa I couldn’t see anything, they were just carrying on with their speeches and I was listening to it until the end.”

The efficiency with which images and official statements were released on the day also suggested that the event was not only approved by the Taliban, but potentially organised by the group itself.

One speaker at the pro-Taliban demonstration said that women participating in anti-Taliban protests are “not true representations of Afghan women, and they are not representing us. They pursue their personal interests by falsely claiming to represent Afghan women”.

On Sunday, Abdul Baqi Haqqani, the Taliban’s higher education minister, confirmed the Taliban would place a complete ban on mixed-gendered teaching and that women should wear “hijab” at schools and universities without specifying.

Marjana, including a professor of the university, said one student was handed an already written speech in English to read it at the lecture hall.

Several requests for an interview with the university staff were left unanswered.

A female student of Kabul University: "The Taliban pressured us to gather in the university hall for an hour with the black robes they had distributed, and they told us that if you do not attend, you will be expelled from university And you will never go to university anywhere." pic.twitter.com/aRlVqpxA4C

Requests to interview students who willingly participated in the pro-Taliban demonstrations were also left unanswered.

Photographs of the event drew condemnation and backlash on social media, with hundreds of women tweeting their pictures in traditional Afghan dress under the hashtag “DoNotTouchMyClothes”.

“This is our traditional dress. even our rice is colourful and so is our flag,” Sodaba Haidare, a BBC journalist, said on Twitter.

During the Taliban rule from 1996 to 2001 until they were removed from power after a US-led invasion, girls and women were not allowed to work or seek education. They were barred from public life and were only allowed outside with a male escort.

After they took over the country’s capital on August 15, the Taliban claimed that it would not enforce such conditions this time.

“I don’t know if they have permission to study or if we are allowed to work. There is no clarity. We don’t know what the future holds for us,” Marjana said.