Texas Sends First Bus of Migrants From The Border to Washington D.C.

Published April 14th, 2022 - 08:00 GMT
The United States reimplemented the Migrant Protection Protocol (MPP) program, also known as “Remain in Mexico”, on December 6 after a court order. (Photo by Guillermo Arias / AFP)
Highlights
The first bus pulled up around 8 a.m. on Wednesday just blocks away from the Capitol building, in front of the building that houses Fox, NBC and C-SPAN

White House press secretary Jen Psaki said it was 'nice' that Texas was giving migrants a free ride on Wednesday when asked about the news that the first bus had arrived from Texas at the nation's capital after Gov. Abbott's new immigration plan to fight back at what he says is the federal government's lax border policies. 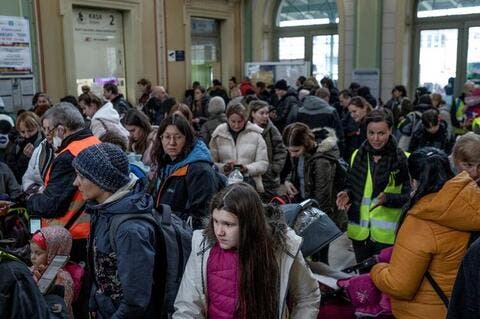 The Republican governor announced last week that he would direct the Texas Division of Emergency Management (TDEM) to charter busses to send migrants released from federal custody into Texas to Washington, D.C.

BREAKING: Texas just delivered the first bus load of illegals to DC, with 100s more BUSES on the way! FINALLY A REPUBLICAN GOVERNOR OTHER THAN @GovRonDeSantis DOES SOMETHING RIGHT!🇺🇸

The first bus pulled up around 8 a.m. on Wednesday just blocks away from the Capitol building at Union Station, in front of the building that houses Fox News, NBC and C-SPAN. The migrants had come from the Del Rio sector in Texas and had traveled to the U.S. border from Colombia, Cuba, Nicaragua, and Venezuela.

'These are all migrants who have been processed by CBP and are free to travel and its nice Texas is helping them reach their final destination as they await immigration proceedings,' Psaki said.

The press secretary added: 'Immigration policy and law is overseen by the federal government.'

After the bus arrived, migrants disembarked one by one, checked in with officials who cut off wrist bands whey were wearing and were told they could go, according to Fox News.

A second bus is currently en route to Washington, the governor's office said in a press release.

Some had predicted that the governor was bluffing, and the legality of his plan is still in question. The White House dismissed it as a 'publicity stunt' last week and Texas GOP state Rep. Matt Schaefer called it a 'gimmick.'

Asked of the plan last week, Psaki said: 'I’m not aware of what authority the governor would be doing that under​.​ I think it’s pretty clear this is a publicity stunt​.'

State officials said they will charter 'as many buses as we need' to send migrants on the 28-hour journey from the border to D.C.

Abbott said that migrant communities would want to be bussed to D.C.

He told Fox News hosts Dana Perino and Bill Hemmer: 'When they come across the border, it's not like they want to stay in the Rio Grande Valley.

'They are moving across the entire country.

'What better place to go to than the steps of the United States Capitol - they get to see the beautiful Capitol, and get closer to the people making the decisions.'

Abbott said that if President Biden would not visit the border himself to see the scale of the problem, the governor would 'take the border to him.'

'And let’s be 100% clear. The idea was to savage Biden and Democrats no matter what they did,' he wrote on Twitter.

Biden refuses to come see the mess he’s made at the border.

So Texas is bringing the border to him.https://t.co/wHZkwnD305

The second prong of Abbott's new immigration plan is border agents are now stopping and searching every single vehicle that comes across the border for smuggled migrants.

'Governor Abbott's unnecessary and redundant inspections of trucks transiting ports of entry between Texas and Mexico are causing significant disruptions to the food and automobile supply chains, delaying manufacturing, impacting jobs, and raising prices for families in Texas and across the country,' she said.

'Local businesses and trade associations are calling on Governor Abbott to reverse this decision because trucks are facing lengthy delays exceeding 5 hours at some border crossings and commercial traffic has dropped by as much as 60 percent.'

Customs and Border Patrol (CBP) too hit out against Abbott, claiming his 'unnecessary' stop-and-search policy 'will impact consumers and businesses nationally.'

After backlash, Abbott eased the state inspections causing delays at one commercial bridge after striking a deal with Nuevo León Gov. Samuel Alejandro García Sepúlveda. Truckers crossing at the Laredo-Colombia bridge had waited up to three hours to cross, far longer than the average wait time of about 15 minutes on a Wednesday afternoon.

As part of the deal, Texas Department of Public Safety will no longer inspect every commercial truck on the Laredo-Colombia bridge as long as Nuevo León had its own checkpoints on its side of the Mexican state's 9-mile-long border with Texas. Abbott's inspections will continue for cargo coming from three other Mexican states that border Texas.

'The border region is going to be lit at night in prominent smuggling areas to make it easier to detect any illegal activity that is taking place.

'If you're a caravan organizer, and you think you can overwhelm a site of entry, we'll be waiting for you.'

The new aggressive measures come as the Biden administration announced that Title 42 will be allowed to expire on May 23. Democrats and Republicans have warned of a mass onslaught of migration once the Covid-19 health restriction that is used to expel most migrants is allowed to expire.

Even Democrat Beto O'Rourke, who is challenging Abbott for the governor's seat, urged the Biden administration not to end the policy without a plan.

'It does not make sense to end this until there is a real plan and the capacity in place to handle those and address those that come over,' O'Rourke told the Texas Tribune on Tuesday. 'I have yet to hear a plan from the Biden administration to address the dynamic we will have on the border once Title 42 ends.'

Department of Homeland Security (DHS) officials have warned that 18,000 migrants could try to cross the border per day once Title 42 is allowed to expire.

And amid news that the Biden administration would extend the mask mandate on public transit another two weeks, Sen. Tom Cotton wrote on Twitter:  'Joe Biden is dropping COVID restrictions for illegal immigrants at the border. But he's extending the mask mandate for Americans on planes. Talk about putting Americans last.'

The mask mandate will be extended another two weeks beyond April 18. Title 42 expires May 23.

Republicans from the House Oversight Committee recently visited the border to survey facilities.

Migrants were caught taking selfies at the unfinished border wall. Comer, who led the trip to the border, said that one migrant was carrying what looked to be a Louis Vuitton bag and the selfies showed the migrants were unafraid to illegally cross into the U.S.

'That shows a lack of fear. They're breaking the law, they're here illegally,' Comer told Fox News Digital. 'But yet they're taking selfies on their Apple phones with their Louis Vuitton purses and Nike shoes, and they're ready to be escorted to their next visit.'

Meanwhile one of the Biden administration's new enforcement policies is to give migrants smartphones when they are released intro the U.S. to track them. There is, however, no way to stop these migrants from getting rid of the phones.

Since March 2020 when Trump enacted Title 42, the policy has been used to expel migrants from the country close to 1.7 million times, mostly being used for single adults. Progressive activists have called on Biden to end the policy, and he held out until this month when he announced its end.

The measure, which dates to a Centers for Disease Control and Prevention public health law instituted in 1944, provides U.S. Customs and Border Protection’s U.S. Border Patrol agents the authority to turn back migrants without allowing them the opportunity to apply for asylum because they were deemed a threat to spread COVID-19 in the country.

A Mexican government official fears there will be chaos unless the Biden administration comes up with a clear plan on how to handle the onrush of nearly 140,000 migrants seeking asylum once Title 42 is lifted next month.

As many as 4,000 migrants are currently staying at shelters in the border town of Tijuana while about 1,500 are housed in shelters in Mexicali as the clock ticks down toward May 23.

Tens of thousands of additional migrants are in Chiapas near Mexico's southern border city awaiting humanitarian visas from the country.

Enrique Lucero, director of the Direction of Attention to Migrants of the Municipality of Tijuana, told DailyMail.com that the Biden administration’s plan to suspend the measure raises many unknown variables on both sides of the border.

'We hope that the United States is very clear about how it will receive all those asylum applications once Title 42 is eliminated because it is not clear whether they will do it in person at the border or if they will do it online,' Lucero said.

'If they do it in person, there will be chaos at the border because everyone will want leave the shelters and arrive at the border and stand in line. So that's going to create chaos for them and us.'