There is No Way Jordanian Teachers Will Give Up Their Demands 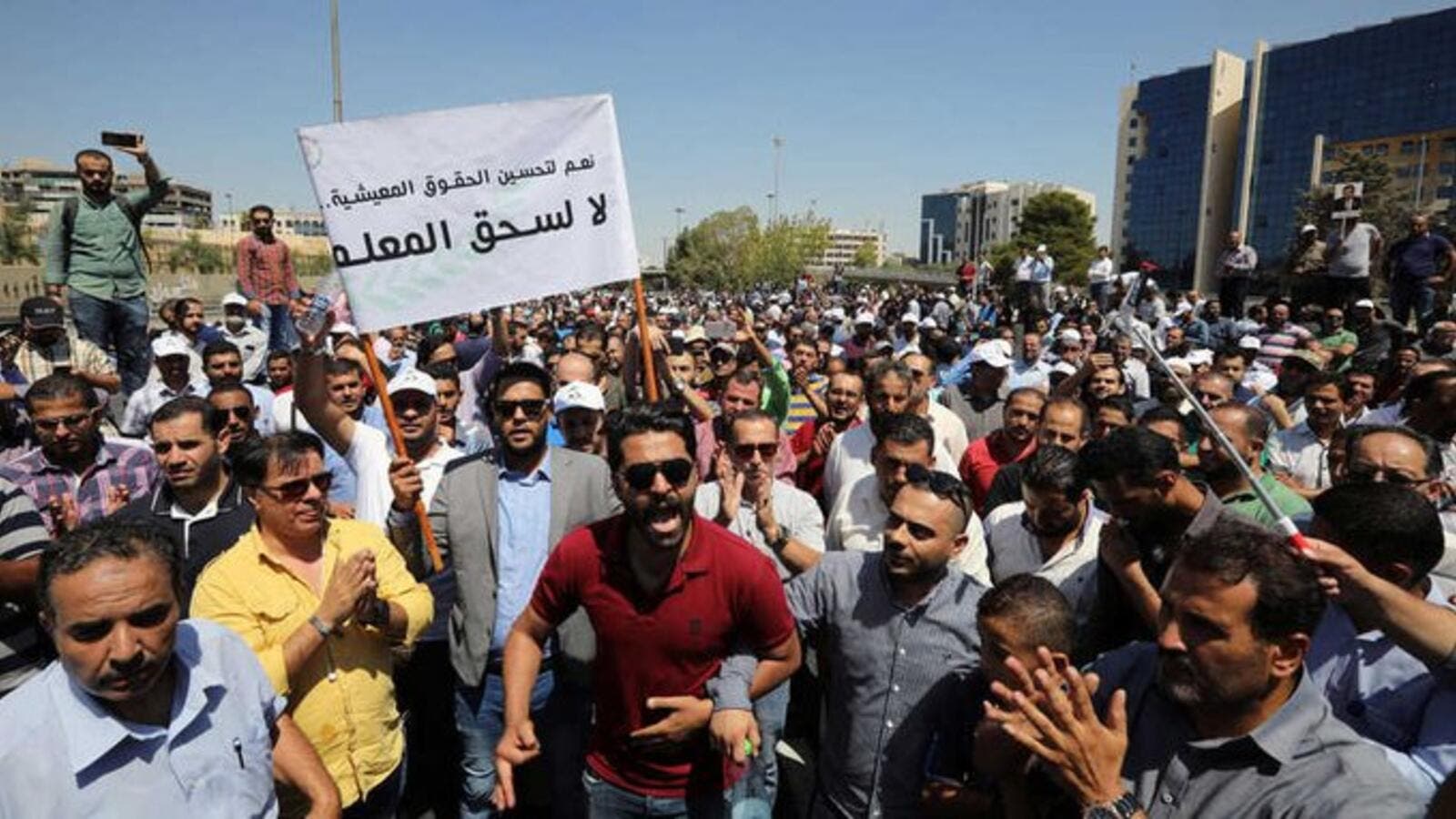 Jordanian teachers (Twitter)
Highlights
The proposal would set a "new model" to improve the living and financial conditions of teachers as well as develop the educational process, the government said.

Prime Minister Omar Razzaz on Saturday chaired a Cabinet meeting to discuss teachers’ strike after teachers said that their nationwide strike will go on until the government apologises to them for "humiliating treatment" and acknowledges their right to a 50-per cent pay raise.

Jordan Teachers Association (JTA) Spokesperson Nouriddin Nadim said that in addition to teachers’ demand for the raise they say was promised five years ago, a genuine dialogue to end the open strike, now in its third week, hinges on an apology for the way the government handled the sit-in they staged in Amman on September 5, during which, he claimed its members were subject to violations.

Speaking to journalists following a meeting of the association's council members, Nadim also requested that a fact-finding committee be formed to investigate the incidents that surrounded the teachers' protest.

Nadim described the government's proposal to the teachers, submitted on Thursday during a meeting between the two sides, as "vague", stressing that it tackles none of teachers' demands.

The proposal would set a "new model" to improve the living and financial conditions of teachers as well as develop the educational process, the government said.

The spokesperson confirmed that the strike, which started on September 8, will continue, and that "there is no way the JTA and its more than 100,000 members will give up their demands”.

For its part, the government held an emergency meeting on Saturday to discuss the issue, after which Minister of State for Media Affairs and Government Spokesperson Jumana Ghunaimat told the press that “all dialogue channels are still open and will remain so”, noting that the government’s proposal still stands, and the way to address the situation is through dialogue.

Nadim said that “the problem with any dialogue is that it has to be always initiated by the government”, which, he claimed, has always ignored their repeated calls for dialogue.

“We invited the government for dialogue four times this year; on May 5, June 30, July 28 and during September, and we never received a ‘yes’,” he said.

“The government always showed a stubborn stance, refusing to listen to our demand of a 50-per cent pay raise, rather, focussing on their own demands,” the spokesperson said.

The spokesperson said that teachers had to resort to halting work after their demands were ignored by consecutive governments over the past five years.

“We were also pushed to strike by the humiliating treatment protesting teachers received on September 5,” he added.

The open strike was announced after a sit-in in Amman on September 5, during which the JTA claimed violations were committed against its members.

The Public Security Department denied the allegations, but confirmed that 50 teachers were detained during the protest for “illegally forcing their way through to the government’s headquarters on Amman’s Fourth Circle”, which was the location designated by the JTA for the protest.

At the time, the government rejected the set location, allowing the teachers to hold their protest near Parliament in Abdali instead, but teachers were adamant on the original spot, but were blocked from reaching Fourth Circle.

“The ball is totally in the government’s court and students’ interest is in their hands. Apologise to teachers; recognise their demand and we can then sit at the table,” Nadim said.