Published August 4th, 2021 - 06:11 GMT
Men gather sheeps to take them away from an advancing fire on August 2, 2021 in Mugla, Marmaris district, as the European Union sent help to Turkey and volunteers joined firefighters in battling a week of violent blazes that have killed eight people. Yasin AKGUL / AFP
Highlights
16,603 residents in 28 neighborhoods have been moved to safer areas, says interior minister

A fire in a residential area of southern Turkey forced some people to evacuate as the country continues to battle massive wildfires that broke out last week on the country’s southern and southwestern coasts.

How can people still ignore the Fires in Turkey? You can literally hear the cries and screams of the animals burning. #helpturkey pic.twitter.com/qzUyfLD3h6

The blaze started in the Beyciler neighborhood of Milas district in Mugla province and spread to four neighborhoods in Bodrum district, reaching the Turkevleri and Oren neighborhoods.

The flames, which spread rapidly with the strong wind, forced residents of one area to leave their homes, with journalists rescuing a cat trapped on a balcony.

Earlier Tuesday, Interior Minister Suleyman Soylu said 16,603 residents of 3,219 households in 28 neighborhoods have been evacuated due to the fires in the country’s south. 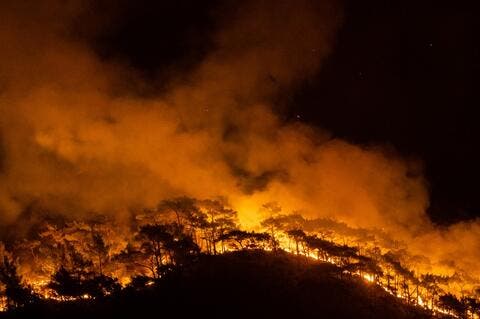 #HelpTurkey! Ankara Braces Itself to Control Its Worst Wildfires

At least eight people have lost their lives in the fires since they started last Wednesday.