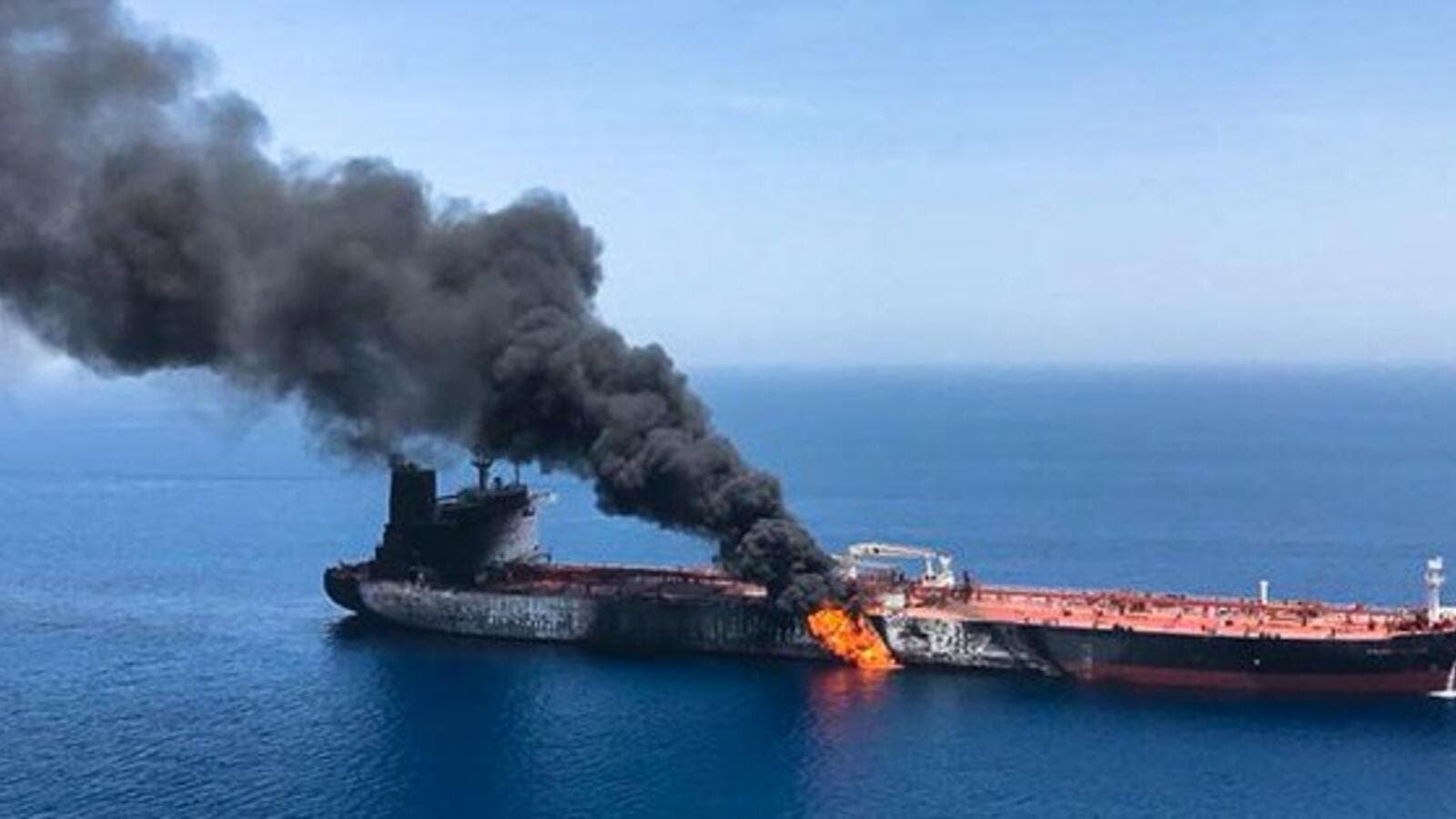 Oil tankers — both of them carrying “Japanese-related” cargo (Twitter)
Highlights
One official said the Japanese government was not convinced by the material, which the official called “nothing beyond speculation.”

Japanese officials say Tokyo has dismissed a claim by the United States that Iran attacked two oil tankers — both of them carrying “Japanese-related” cargo — in the Sea of Oman.

Japan’s Kyodo news agency cited informed state officials as saying Tokyo had demanded that Washington examine the case further, and that grainy video footage released by the US as supposed evidence was unclear and could not be used to prove anything.

One official said the Japanese government was not convinced by the material, which the official called “nothing beyond speculation.”

The official said Japan’s Foreign Minister Taro Kono had in a Friday phone conversation with US Secretary of State Mike Pompeo demanded more data in the case.

The Japanese-owned Kokuka Courageous and Norwegian-owned Front Altair oil tankers were struck by explosions near the strategic Strait of Hormuz on Thursday morning. Japan’s government said both vessels were carrying “Japanese-related” cargo.

Shortly after the two tankers were hit by the explosions, Pompeo blamed Iran. A day later, US President Donald Trump made a similar claim. Neither offered any evidence, and the footage that was released was said by US officials to show Iranian personnel removing an “unexploded” mine.

Experts have said the explosions could have been false flags to implicate Iran at the time of a historic visit by Japanese Prime Minister Shinzo Abe to Iran, a first of its kind in more than 40 years. Prime Minister Abe was meeting with Leader of the Islamic Revolution Ayatollah Seyyed Ali Khamenei when the explosions happened.

According to Kyodo, a source close to Prime Minister Abe also said that the footage did not prove an Iranian attack.

Separately, a Japanese Foreign Ministry source said the attack being sophisticated was no reason to blame Iran. Such a characteristic, according to the source, could also implicate the US and Israel — Iran’s main adversaries.

The Japanese operator of one of the tankers also said it had been hit by “a flying object,” not a mine.

A short while after the incident, Iranian rescue officials picked up a distress signal sent by the tankers and scrambled a vessel, which then safely removed the crew from the waters around their burning ships.

Independent intelligence experts have expressed doubts about whether the footage released by the US incriminates Iran, as US officials have claimed.

William Church, a former military investigator for the United Nations Security Council, told Newsweek on Saturday that the US had doctored evidence before.

“The US track record on ginning up evidence for war is not good,” he said. “It lied in the run-up to the Vietnam war [by inventing a North Vietnamese attack on a US Navy ship in the Gulf of Tonkin in 1964], and it lied about WMD (weapons of mass destruction) before the Iraq war. So when these tanker attacks happen, we have to ask why and what’s the motivation in addition to examining the evidence.”

“The video means nothing. We need to know how it was taken, when was it taken, what was the total sequence. Then you’d have to talk to the people in the video to get their view of what happened. I would check to see if the video was doctored. You would need to do everything that a trained investigator would do,” he said.

Ayham Kamel, the head of Middle East analysis for the Eurasia Group, an international risk analysis consultancy, suggested that Saudi Arabia might have carried out attacks on the tankers to blame them on Iran because Riyadh was increasingly under pressure from retaliatory strikes by Yemeni Houthis, whom the Saudis claim are Iranian-backed.

“The Saudis are alarmed [by the retaliatory Yemeni strikes,” Kamel said. “Their response is going to be to try to pressure the US into action.”

Anthony Cordesman, a strategic analyst at the Center for Strategic and International Studies, also raised the possibility that Riyadh, or Abu Dhabi or Daesh, could have been behind the incidents.

“One has to keep asking the question, well, if it isn’t Iran, who the hell is it?” he said. “You come up with the possibility that ISIS (Daesh) carried out the attack as trigger to turn two enemies — the United States and Iran — against each other. Or you’re watching Saudi Arabia and the United Arab Emirates create an incident that they can then use to increase the pressure on Iran.”

“The truth of the matter is either you have evidence, or you don’t,” he added. “Is there hard evidence that Iran is guilty? The answer is no.”