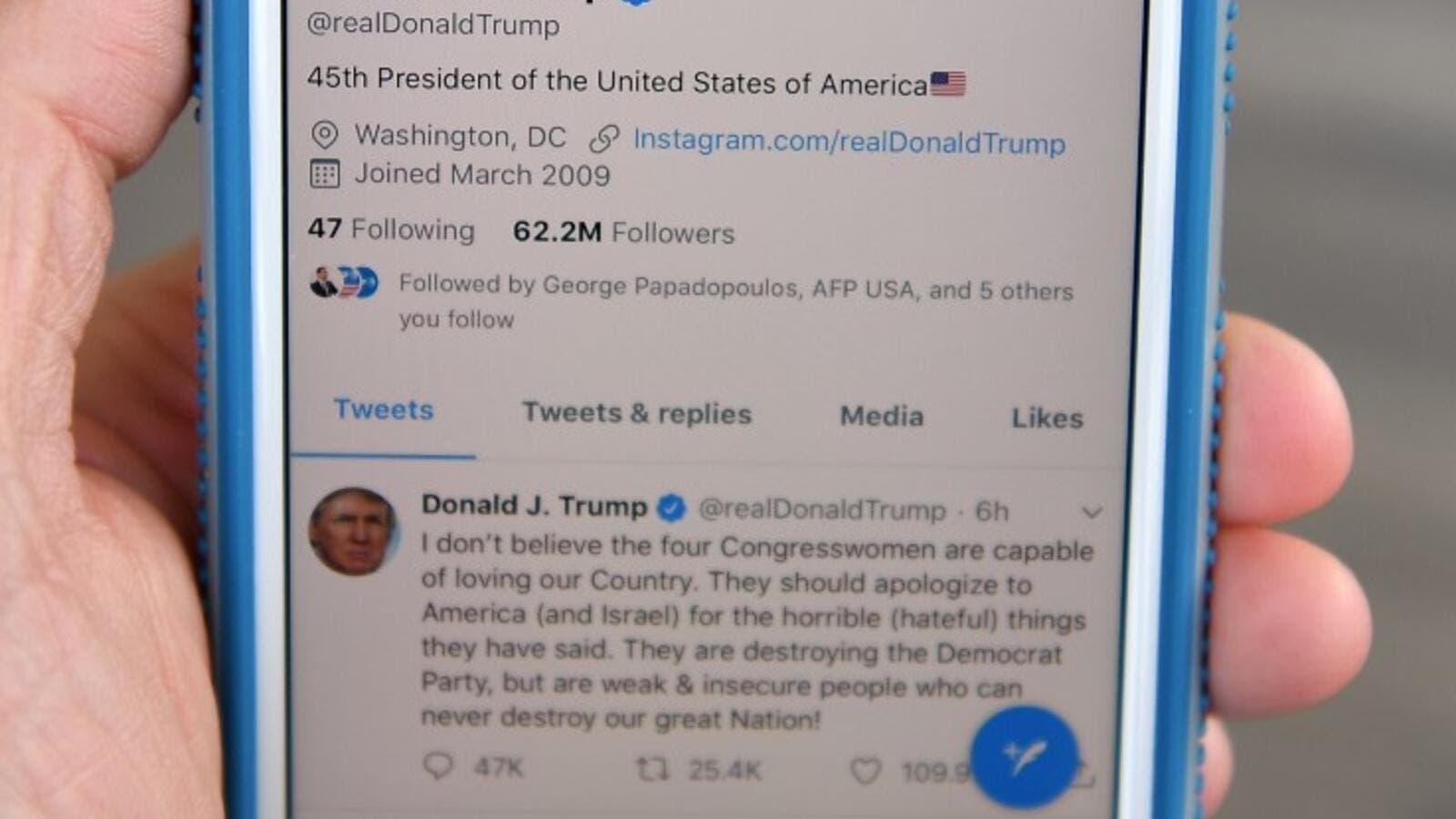 A July 21, 2019 photo of a cell phone showing the Twitter page of US President Donald Trump in Morristown, New Jersey. Trump renewed his attack on four Democratic congresswomen. MANDEL NGAN / AFP
Highlights
In a rare move, Trump was rebuked by the Democratic-controlled House of Representatives on Tuesday for "racist comments" against the women, who are known as the "Squad".

US President Donald Trump renewed attacks on four Democratic congresswomen he launched xenophobic tweets against last week, demanding they apologise "for the horrible (hateful) things they have said."

"They should apologize to America (and Israel) for the horrible (hateful) things they have said. They are destroying the Democrat Party, but are weak & insecure people who can never destroy our great Nation!" the president tweeted.

The comments come a week after Trump sparked a firestorm of outrage when he attacked the left-leaning lawmakers with a series of tweets, saying they should "go back" to their countries of origin.

The group - three of whom were born in the United States - are of Hispanic, Arab, Somali and African-American descent. Ilhan Omar came to the US as a child, fleeing war in Somalia. In 2018, she and Rashida Tlaib became the first Muslim women ever to be elected to Congress.

In a rare move, Trump was rebuked by the Democratic-controlled House of Representatives on Tuesday for "racist comments" against the women, who are known as the "Squad".

The following day, chants of "Send her back!" broke out at the president's 'Make America Great Again' rally in Greenville, North Carolina, when he again attacked the women.

To the delight of his thousands of supporters, Trump described Omar and the other Democrats as "left-wing ideologues (who) see our nation as a force of evil."

Trump later said there was "great energy" at the rally but claimed he was not pleased by the taunts.

"I was not happy when I heard that chant," he said. "I didn't like that they did it, and I started speaking quickly" to move on with his speech.

Television footage showed, however, that Trump let the chant continue for more than 13 seconds, only resuming speaking as they died down.

The president demonstrated in Greenville that without a Democratic presidential candidate to focus on yet, he plans to make inflammatory attacks on the Squad a centerpiece of his 2020 re-election strategy.

Several of the Democratic presidential hopefuls who plan to run against him and a few of the Republicans have urged Trump to tone down the rhetoric.

But the president has made it clear - despite the risk of inflaming racial tensions and widening the partisan divide - that he believes he has latched on to a winning strategy.

Trump tapped into grievances among white blue-collar and rural Americans to eke out a narrow victory in 2016, winning 57 percent of white voters while his rival Hillary Clinton won 37 percent.