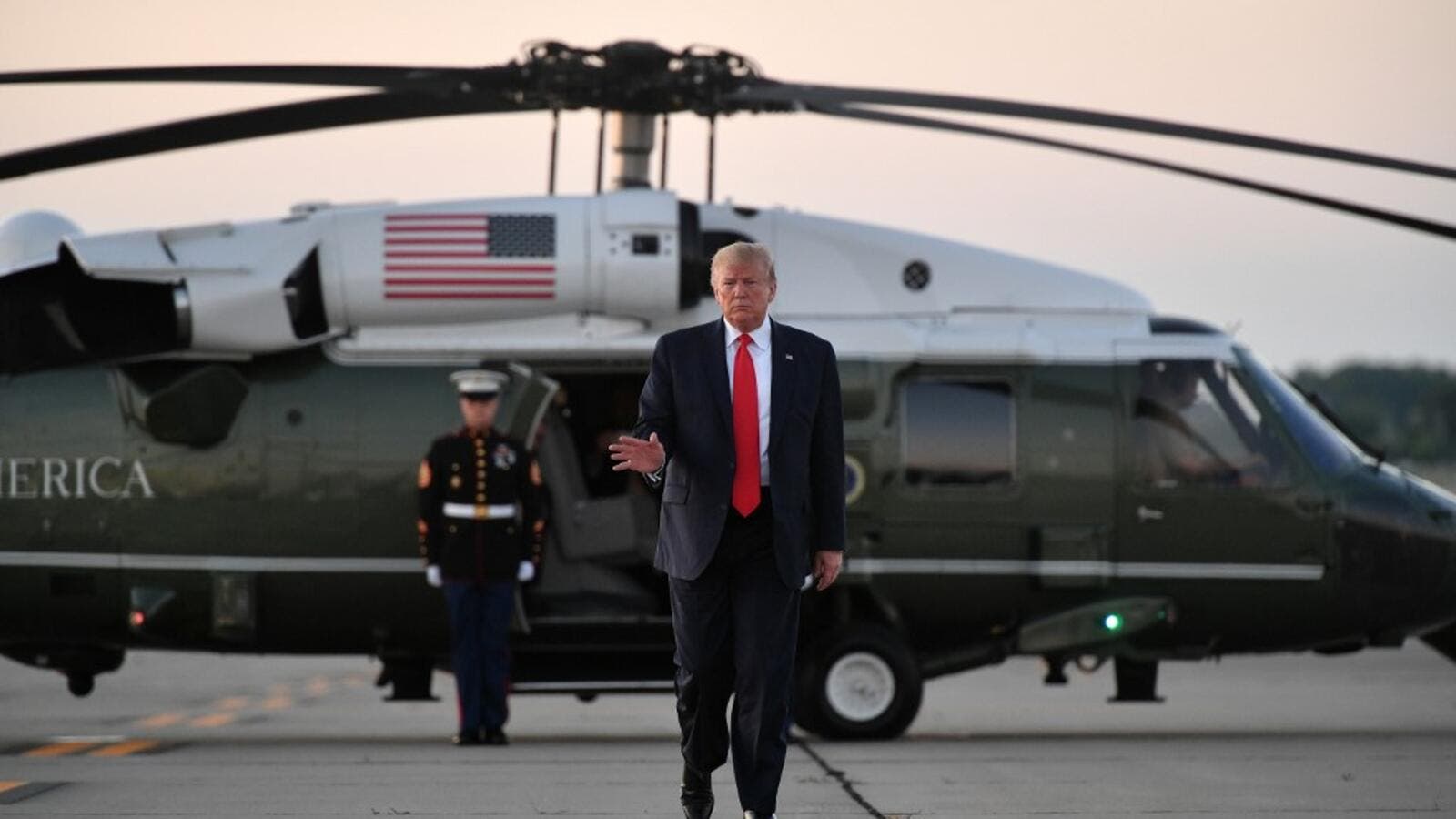 US President Donald Trump makes his way to board Air Force One before departing from Cleveland Hopkins International Airport in Cleveland, Ohio on July 12, 2019. (MANDEL NGAN / AFP)

The best illustration of the incoherence of the administration’s strategy toward Iran came in a recent White House press release. “There is little doubt that even before the deal’s existence, Iran was violating its terms,” it read. The White House has not subsequently explained how a country can violate the terms of a deal before that deal existed. This is not the only example of incoherence.

When President Donald Trump announced last month that he had called off military strikes against Iran, he said it was because he learned that an estimated 150 Iranians would have died in those attacks. Instead he has further tightened economic sanctions against Iran. The sanctions being levied against Iran are having a “massive and crippling” effect on the country, says Jeffrey Sachs, an economist who has studied the effects of such measures. “Sanctions like these are known to cause a significant rise in mortality,” he notes. “Given the size of Iran’s population, around 81 million, this is sure to be far larger than 150 deaths.”

And keep in mind, the people who would have died in the military strikes likely would have been Iranian soldiers. Those who are now dying because of sanctions are newborn babies, mothers, the elderly and sick. An academic study points out that sanctions produce widespread drug shortages, and those who suffer most are “patients struggling with cancer, multiple sclerosis, blood disorders and other serious conditions.”

The Trump administration has created a humanitarian crisis in Iran and a geopolitical crisis in the Middle East with no strategy to resolve either. The Iran pact had forced Tehran to commit that it would never develop nuclear weapons, to ship away 98 percent of its enriched uranium, destroy its plutonium reactor and agree to limits and intrusive inspections for 10-25 years. The international inspectors - as well as the intelligence agencies of the major powers - confirmed that Iran was adhering to the deal.

By withdrawing from the pact, the Trump administration has allowed Iran to start moving away from these limits. For example, Tehran had agreed that it would not develop more than 300 kilograms of low-enriched uranium until 2030. It had kept within those parameters since 2015. Iran recently exceeded that limit, justifying its move by pointing out that the United States had itself abrogated the pact.

The United States’ actions toward Iran have also created a rift within the Western alliance. Europe had been strongly supportive of Washington’s Iran policy, and the joint pressure had worked well in bringing Tehran to the negotiating table. Now the Europeans are in open revolt against Washington’s unilateralism and have even made efforts to establish an alternative payment mechanism to the dollar for trade with Iran.

Other nations in the Middle East sense Iran’s weakness and are moving to take advantage. Israeli officials have privately briefed Western diplomats that they might decide to strike at Iran’s existing nuclear facilities in the near future. Saudi Arabia, for its part, has celebrated the American campaign of maximum pressure as it pursues a broad anti-Iranian policy on several fronts.

As the noose tightens around Iran, it has been reacting with incremental actions by its own military or more often associated militias - from Yemen to the Gulf. Each of these then produces a response from Saudi Arabia or the U.S.

In other words, Trump has sharply ratcheted up regional tensions with no good plan to resolve them.

The Trump administration is hoping for capitulation from the Iranians, in which they will return to the negotiating table and accept a deal far more onerous than the one they signed in 2015. It’s possible that this will happen but much more likely that this regional cold war gets more tense and the likelihood of miscalculation or accidental war rises.

Even if there were some kind of temporary Iranian concessions, born out of desperation, they will surely not last. Wounded, embittered powers always find a way to return with a vengeance. The Trump administration seems to forget that the Iranian civilization has been a major player in the Middle East for thousands of years. It has a population more than double the size of Iraq’s and is more strategically located. It has a strong tradition of nationalism and statecraft and a history of resisting foreign domination.

The path to stability in the Middle East does not lie in strangling Iran. That will only sow the seeds of resentment and revanchism, creating a more unstable region and one in which the United States will find itself mired for decades.

Alas, this is the path on which we find ourselves moving.

Fareed Zakaria is published by The Daily Star.