Published August 12th, 2021 - 06:24 GMT
A firefighter sprays water in aforest devastated by a fire, in the northern Tunisian Bizerte governorate, on August 11, 2021. In Tunisia, the temperature in the capital Tunis hit an all-time record of 49 degrees Celsius (120 degrees Fahrenheit) yesterday and emergency services reported 15 fires across the north and northwest, but no casualties. (Photo by Hasan Mrad / AFP)
Highlights
Tunisia’s National Institute of Meteorology blames fires on high temperatures

Officials said that forest fires in Tunisia's northern Bizerte and Jendouba provinces have destroyed 450 hectares of the country’s pine and acacia forests. 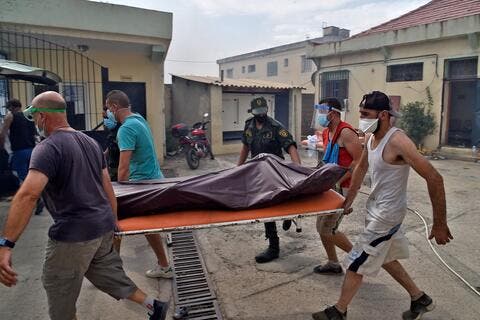 "Nine wildfires erupted in Bizerte in less than 24 hours and damaged around 50 hectares,” Brigadier Kamal El-Meliti, the director of civil protection department in the province, said.

Wildfires in Tunisia's northern Bizerte and Jendouba provinces have destroyed 450 hectares of the country’s pine and acacia forests https://t.co/qINSxYzzrk pic.twitter.com/1ZYzamvCKa

According to El-Meliti, more than 100 hectares of forests were also damaged by the flames in Mount Nadhour in Bizerte.

Fires were also reported in Ain Drahem in Jendouba province, amid reports that around 300 hectares of forests were destroyed.

A Tunisian source said on condition of anonymity that efforts were underway to contain the fires in cooperation between the Tunisian army, the Civil Protection and the Forests Management.

The scale of the wildfires is terrifying. They extend all the way to Tunisia. pic.twitter.com/puI0d4WDYI 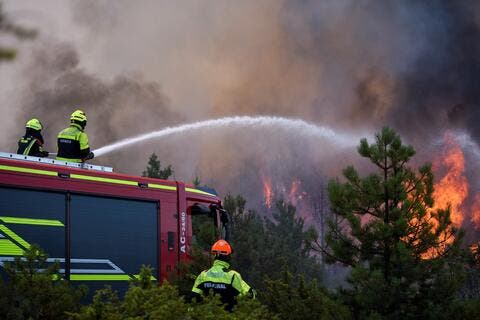 The Tunisian National Institute of Meteorology blames the fires on high temperatures in the North African country.

A number of countries on the Mediterranean Sea are struggling to extinguish fires that broke out in different areas in recent weeks, including Turkey, Greece, Algeria and Italy.