Published May 29th, 2022 - 05:32 GMT
Ukrainian soldiers ride on a self-propelled howitzer on a road in Kharkiv region on May 17, 2022, amid Russian invasion of Ukraine. (Photo by SERGEY BOBOK / AFP)
Highlights
250 soldiers killed over past day alone, according to Ukrainian General Staff

At least 30,000 Russian soldiers have so far been killed during the war in Ukraine, the Ukrainian General Staff said on Saturday. 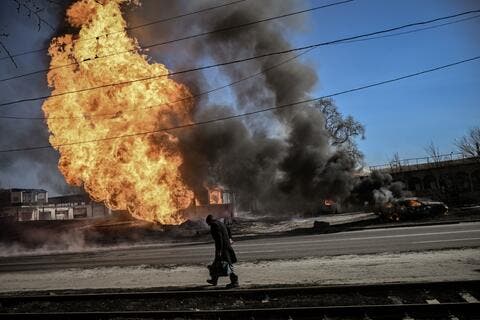 Some 250 Russian troops were killed over the past 24 hours, according to a Ukrainian General Staff statement.

30,000. Does this huge number make us happy? No. This should not have happened. But as long as even one enemy soldier remains on our land, we will continue to be unhappy, regardless of how many zeros are added to this horrible statistic. pic.twitter.com/Ex11v5aXu4

Russia has also lost 2,226 vehicles, 13 ships and light boats, and 503 unmanned aerial vehicles along with 116 cruise missiles, the statement added.

Russian figures for its soldiers killed have been far lower than Ukrainian figures.

At least 4,301 civilians have been killed and 4,735 injured since the war in Ukraine began on Feb. 24, according to UN estimates. The true toll is believed to be significantly higher.

Over 6.6 million people have fled to other countries, while more than 7.7 million have been internally displaced, according to the UN refugee agency. That represents roughly one-third of Ukraine's pre-war population of 43 million people.