The UN: Democratic Values of Tunisia's Revolution Must be Preserved

Published January 23rd, 2022 - 08:34 GMT
A Tunisian man waves his country's national flag during protests against President Kais Saied, on the 11th anniversary of the Tunisian revolution in the capital Tunis on January 14, 2022. (Photo by FETHI BELAID / AFP)
Highlights
Antonio Guterres said UN is following with concern developments in Tunisia 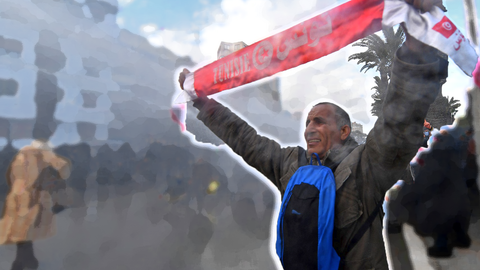 Is Tunisia on the Brink of a New Revolution?

“The Tunisian democratic revolution was something that inspired hope around the world, and we certainly want it to be preserved in all democratic values,” Guterres said in a press conference.

#UN Secretary-General 👉"#Tunisia’s democratic revolution was something that inspired hope all over the world (...) I hope that those concerns will be removed by the full restoration of an institutional democratic framework that works for all Tunisians" https://t.co/OsABpdLvwc

Guterres said the UN is following "with concern" the developments in Tunisia following the exceptional measures taken by Tunisian President Kais Saied, in which he consolidated much of the country's power under his authority.

“We see the concerns and I hope that these concerns will be lifted by the full restoration of an institutional democratic framework that works for all Tunisians,” he said.

On July 25, Saied ousted the government, suspended parliament, and assumed executive authority. While he insists that his "exceptional measures" are meant to "save" the country, critics have accused him of orchestrating a coup.

UK: Conservative Politician Says She Was Sacked From Govt 'for Being Muslim'