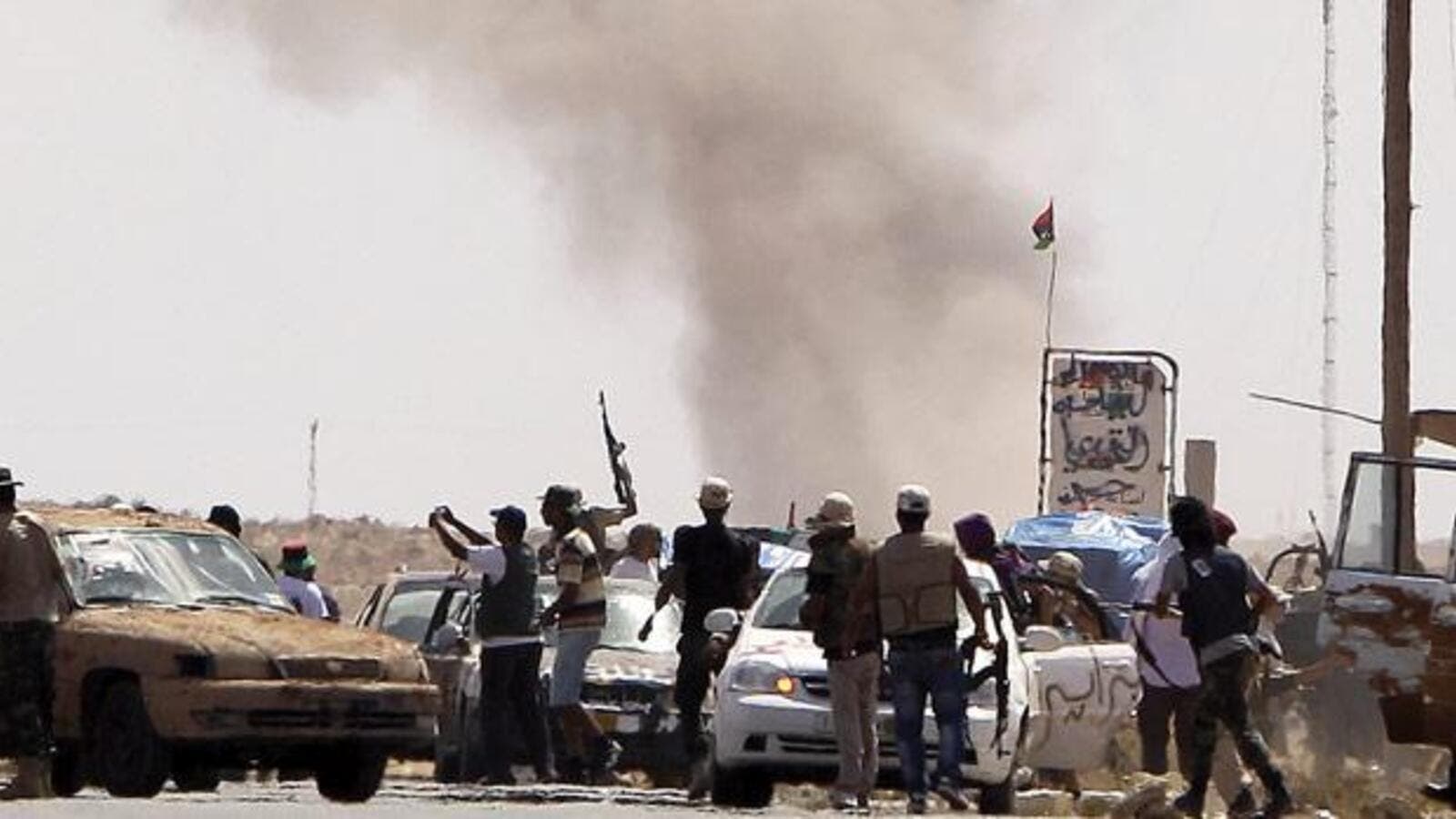 Libyan National Transitional Council fighters come under Grad missiles attack from Gaddafi loyalists at an outpost on the outskirts of the city of Bani Walid. (Joseph Eid/ AFP)
Libya’s government of national accord and the United Nations mission in the country called on Sunday for an immediate ceasefire in the southern city of Sabha after five days of tribal clashes left dozens of people dead.

The Libyan National Army (LNA), meanwhile, announced that it was withdrawing some of its units from the city.

Spokesman Ahmed al-Mismari explained in a brief statement that some of the units had redeployed in other areas.

He did not disclose any details, but military sources told Asharq Al-Awsat that the move was part of a new tactic aimed at recapturing Sabha, the South’s largest city.

The violence between the Arab Awlad Suleiman and non-Arab al-Tabou tribes in the city has been the worst since February. It has led to the displacement of over 200 families.

Sabha is controlled by the LNA and forces loyal to prime minister of the accord government, Fayez al-Sarraj.

LNA commander Field Marshal Khalifa Haftar had held an emergency meeting at his Rajma headquarters outside of the eastern city of Benghazi on Saturday to tackle the unrest in the South.

Sarraj will hold a meeting later with tribal delegations from the South to discuss the fighting.

Over the past three days, Haftar’s forces have been waging fierce battles in Sabha that have left 45 people dead or wounded, said the UN.

It expressed its deep “disturbance” at the escalating violence in Sabha. It called for restraint and the resumption of dialogue between the various factions, saying that it was employing all of its resources to restore calm.

Sarraj called for an immediate ceasefire, saying there can be no military solution to the unrest.

His government, he stressed, stands at an equal distance from all sides and was exerting efforts to achieve reconciliation and a settlement in Sabha.
The military escalation only serves the interests of terrorist groups and those seeking to harm the country, he warned.

The Foreign Ministry, meanwhile, had demanded that a comprehensive and urgent probe be launched into claims that armed Sudanese and Chadian groups were fighting alongside the Tabou tribes in Sabha.

Separately, Haftar had at least twice demanded from the US administration logistic information and satellite images of the map of terrorist groups in Libya, revealed Libyan sources to Asharq Al-Awsat.

Haftar had refused the participation of special American forces in his operation to liberate the city of Derna from terrorists.

The city is the extremist groups’ last remaining stronghold in the eastern region. Hafter had launched his operation last week.

The LNA commander had also refused the deployment of US forces in regions under the LNA control, calling on Washington to, in return, exert efforts to lift the UN Security Council ban on rearming his troops, said the sources.
This article has been adapted from its original source.