Published December 9th, 2021 - 11:48 GMT
A demonstrator raises a Palestinian flag during a demonstration by Palestinian, Israeli, and foreign activists against Israeli occupation and settlement activity in the Palestinian Territories and east Jerusalem, in Jerusalem's Palestinian Sheikh Jarrah neighbourhood on July 30, 2021. (Photo by AHMAD GHARABLI / AFP)

Israeli forces have surrounded the neighborhood of Sheikh Jarrah in occupied East Jerusalem Wednesday morning, following the stabbing of an Israeli Jewish settler in the area, the official Palestinian news agency WAFA reported. 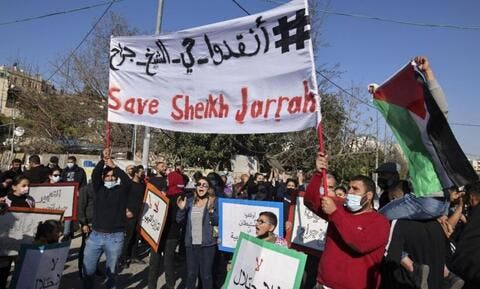 Eyewitnesses told WAFA that Israeli police closed all roads leading to the neighborhood, broke into homes, stopped and checked cars and buses as a helicopter hovered over the area in search of the alleged attacker identified as a woman who was able to get away.

Photos | Israeli occupation forces left all of this destruction behind after raiding and sabotaging a school in Sheikh Jarrah neighborhood in occupied Jerusalem, arresting 5 female Palestinians under the pretext of an alleged stabbing attempt.#SaveSheikhJarrah pic.twitter.com/Pdy8bSNNvH

The stabbed woman was reported to be 30 years of age and was said to be in light condition.