A University Blown up: Russia's Deadly Potshot in Ukraine

Published July 7th, 2022 - 05:28 GMT
A photograph taken on June 6, 2022 shows debris past a mural in a staircase of the Kharkiv's Pedagogical University building destroyed by a missile hit in Kharkiv, amid the Russian invasion of Ukraine. According to the prosecutor's office of the Kharkiv region, a 40-year-old watchman died as a result of the hit. (Photo by SERGEY BOBOK / AFP)
Highlights
Kharkiv University was totally destroyed by a strike from Russia. 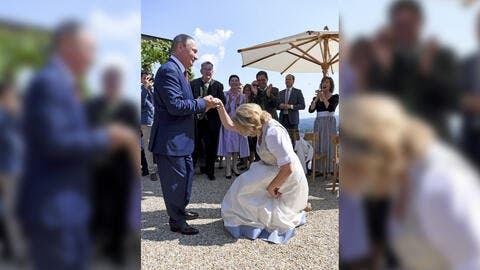 Which Austrian Minister Danced With Putin on her Wedding Day?

The Pedagogical University's main building, lecture halls, museum and scientific library were all destroyed in the strike, he said during his nightly televised speech.

LIVE: Ukrainian President Volodymyr Zelenskyy has praised the accuracy of artillery sent by Western allies. He added that a Russian strike had destroyed a university in Kharkiv.https://t.co/Euxg4IoQtA

"This characterizes the Russian invasion with 100% accuracy," Zelensky said. "When it comes to the definition of barbarism, this strike fits the bill.

"Only an enemy of civilization and humanity can do such things -- strike misses at a university."

The Kharkiv Regional Prosecutor's Office said a guard was killed in the shelling, according to CNN. Authorities have launched a war crimes investigation into the attack, Ukrinform reported.

Situated in the northeast near the border with Russia, Kharkiv has sustained weeks of attacks from the Russian military.

Zelensky said artillery received from Western allies have proven to be effective in Ukraine's defense against Russia.

"Its accuracy is exactly as needed. Our defenders inflict very noticeable strikes on depots and other spots that are important for the logistics of the occupiers," he said in his nightly address.

Last night a russian missile destroyed the Hryhoriy Skovoroda Pedagogical University in Kharkiv together with the monument to its patron.A quote by Skovoroda was written on the wall behind the statue:
"We will build a better world, we will make a brighter day come."
Yes, we will! pic.twitter.com/i5wO5EtFVx

"And this significantly reduces the offensive potential of the Russian army. The losses of the occupiers will only increase every week, as will the difficulty of supplying them."

Zelensky said he anticipates that Russian losses will increase every week with the help of the weapons.