Published July 12th, 2021 - 09:48 GMT
Workers clear the remaining rubble of the Hanadi Tower, a building that was levelled in an Israeli attack during the 11-day conflict between the Jewish state and the Palestinian Hamas movement in May this year, in Beit Lahia in the northern Gaza Strip, on July 8, 2021. MOHAMMED ABED / AFP
Highlights
Massive distruction in Gaza reported after the latest Israeli war.

The recent flare-up in the Gaza Strip has left a "large-scale devastation" to thousands of homes and the city's infrastructure, according to the UN. 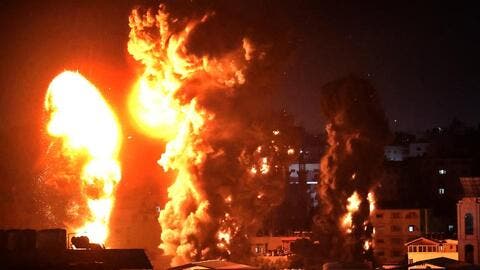 Gaza Needs $485 Billion to Recover After War with Israel

When Israeli actor Einat Weizman wore a T-shirt emblazoned with the Palestinian flag during the 2014 war on Gaza, she received rape and death threats.

These Palestinian and Israeli artists are fighting attempts to silence dissent: https://t.co/ze5NY34z1C

Acting Director of the UN Refugee and Works Agency (UNRWA) in Gaza Sam Rose said the Agency would continue assessing the level of destruction and damage wrought by the Israeli military in the 11-day war, adding it will continue paying house rent for afflicted families.

"Until this moment, a total of 1,200 houses had been assessed based on the information filed with the UNRWA through the Ministry of Public Works and Housing's portal." according to the Agency.