Published March 27th, 2022 - 09:59 GMT
Fire fighters extinguish the last hearths of fire at a Saudi Aramco oil facility in Saudi Arabia's Red Sea coastal city of Jeddah, on March 26, 2022, a day after a Yemeni rebels attack. Yemeni rebels said they attacked a Saudi Aramco oil facility in Jeddah as part of a wave of drone and missile assaults today as a huge cloud of smoke was seen near the Formula One venue in the city. (Photo by AFP) 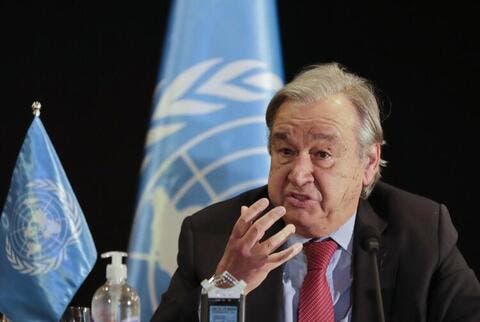 The UN's Response to Flaring Violence in Yemen

Sullivan also wrote that this strike was “clearly enabled by Iran in violation of U.N. Security Council resolutions prohibiting the import of weapons into Yemen.”

The March 25 attack follows a series of strikes on Saudi Arabia and recently the UAE claimed by Houthi rebel forces in Yemen who, after years of Saudi coalition-led strikes in Yemen, have been targeting areas outside of Yemen’s borders.

Missile and drone strikes by Houthi forces backed by Iran have targeted Saudi oil and energy facilities, Saudi civilian airports and territory in the UAE.

Saudi Arabia and its coalition intervening in Yemen then answered these strikes with attacks of their own on parts of Houthi-controlled Yemen.

Notably, a Saudi-led airstrike on a Houthi-run prison in Sa’ada, Yemen, killed an estimated 91 people and injured 236 more in January 2022, according to a report by the United Nations.

One particularly devastating example occurred back in 2018, when a Saudi-led coalition airstrike hit a school bus in Yemen, killing at least 26 children and wounding 19 more according to a report by Human Rights Watch.

The Saudi-led coalition later acknowledged the strike and said it was done due to “mistakes.”

The war in Yemen has left thousands dead and resulted in what the United Nations classified as the worst ongoing humanitarian crisis in the world.