Published February 5th, 2022 - 07:03 GMT
Red tape is extended and objects are set on fire, around the hous in which the leader of Islamic State (IS) group Amir Mohammed Said Abd al-Rahman al-Mawla , aka Abu Ibrahim al-Hashimi al-Qurashi died, during an overnight raid by US special forces, in the town of Atme in Syria's northwestern province of Idlib, on February 3, 2022. US President Joe Biden said today, a global "terrorist threat" was removed when the head of the Islamic State blew himself up after US special forces swooped on his Syrian hideout in an "incredibly challenging" nighttime helicopter raid. (Photo by Abdulaziz KETAZ / AFP)

Pentagon spokesman John Kirby provided more details about the operation that killed the leader of the ISIS terror group in northwestern Syria. 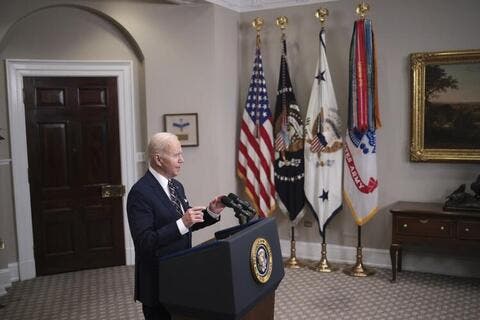 Biden in Press Conference: ISIS Leader Blew Himself Up

A night raid by American special forces on a building on the outskirts of Atima led to the death of ISIS leader Ibrahim al-Hashimi al-Qurayshi, also known Hajji Abdullah.

President Biden said Al-Qurayshi blew himself up on the third floor of the building, killing his wife and two children. His body was identified through fingerprints and DNA analysis at the site, said Kirby.

Al-Qurayshi's aide and the aide’s wife engaged in gunfire with U.S. forces from the second floor and were also killed.

U.S. forces evacuated 10 people from the first floor, who Kirby said were an adult male and adult female and four children, and then four children from the second floor.

Four civilians, including three children, were killed during the operation, he said.

When asked by Anadolu Agency if those who were evacuated were under custody, Kirby said there was no one in U.S. custody as a result of the operation.

In addition, Kirby said a small group of individuals approached the compound during the mission, adding "they were appropriately deemed as hostile and they were engaged and we know that in that engagement, two of them were killed."

He said the operation was a months-long planning mission.

The YPG, the Syrian branch of PKK, assisted in the operation that was conducted by U.S. forces, according to the spokesman.

According to the White Helmets formally known as Syria Civil Defence, at least 13 people, including six children and four women, were killed during the raid said.

Sources told Anadolu Agency one of the occupants of the house was taken by U.S. forces.

Al-Qurayshi was named the new leader of Daesh/ISIS in 2019 after the U.S. killed Abu Bakr al-Baghdadi earlier that year.