Published August 30th, 2021 - 07:44 GMT
DC Insider spoke with Khalil Jahshan, Executive Director of Arab Center Washington DC, and Michael Pregent, senior fellow at Hudson Institute, to gain further insight concerning the tragic events that are currently taking place in the streets of Afghanistan.
Highlights
Will the US troops make it out on time, which is in less than 24 hours, what could the repercussions ultimately be if the troops do not make it out by tomorrow’s looming deadline, particularly for the Taliban?

Currently, Afghanistan is going through its own rendition of history repeating itself; the country is in utter turmoil, and the blame continues to be tossed from one terrorist organization to the next and then simply circles back to the U.S and its allies. 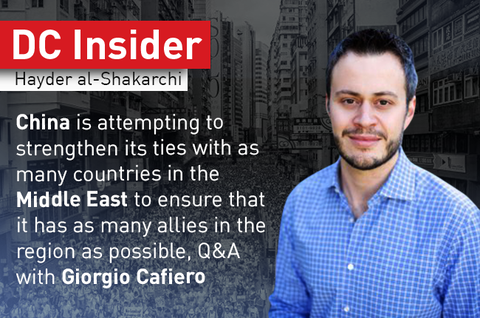 DC Insider: How likely do you think that the troops will be able to make it out on time, which is in less than 24 hours, and what could the repercussions ultimately be if the troops do not make it out by tomorrow’s looming deadline, particularly for the Taliban?

Jahshan: "Well, initially there was an arrangement between the U.S. government, the Afghan government, and the Taliban in this regard. However, events have superseded developments on the ground and so the direct answer to your question is probably unknown, even by the president of the United States. The U.S. is definitely committed to withdraw as soon as possible, but what they have negotiated in recent days and hours is based on continuing needs- to resume the withdrawal- so I think that the Taliban is fully aware of the deadline [and its possible repercussions.]”

DC Insider: The U.S. is more than capable of getting things done stealthily and efficiently and they definitely have had more than ample time to plan this evacuation process. Why does everything seem to be so unorganized and chaotic, especially in regards to all of the current attacks coming from all of the various terrorist organizations in Afghanistan?

Jahshan: "Yes, things are not moving as fast; the chaotic nature of the withdrawal, the slow pace, the lack of preparedness regarding logistics, etc. Thus, the large crowd that developed a gathering at the airport cannot even come close to hindering the current activity on the ground due to their unfortunate inability to absorb these large numbers [due to their limited resources.] The administration only realized this after the unfortunate development at the airport and came to the conclusion that they might need additional time… This is what finally led them to seek out intervention through Qatar and others to resume conversations with the Taliban.”

DC Insider: How would you describe this ‘arrangement’ that the U.S. and the Taliban have come to? It seems to be going down an exceptionally bewildering path, mostly for the Afghanis… Is there more going on behind the scenes that the public is not aware of quite yet, with all of the unfortunate events that have continuously been occurring at the airport in recent days?

Jahshan: “Essentially, the arrangement allows the Taliban to tighten up its control over the airport directly because there are other fractions within the terrorist organization that are also involved. Hence, the U.S. felt more comfortable once the Taliban were granted full access over the airport. In order to do so, that meant giving the Taliban complete and total access to the airport, all the way from downtown Afghanistan to the airport. As a result, U.S. citizens, foreign diplomats, and even Afghan civilians- who have been affiliated with the U.S. during its occupational presence in Afghanistan- have to go through these multiple roadblocks. Eventually, they will also grant access for the Afghan citizens, who either have immigration papers to the U.S. or have been promised such because of their affiliations as interpreters or assistants to the U.S. troops, to finally have access to the airport.”

DC Insider: Sir, with all due respect, the deadline is tomorrow and events on the ground just seem to be getting worse and worse by the minute as the deadline rapidly approaches. Isn’t an extension of the deadline a necessity by now?

Jahshan: “The U.S. is still committed to the deadline; the deadline has not disappeared. However, there is an understanding now between the U.S. and the Taliban that there should be a need for an extension in which all of the major players will surely take into consideration. This is what diplomacy is all about: Pure and utter vagueness. The simple understanding that the Taliban can say that they are still intact and the U.S. can say that they have additional time is proof of that.”

DC Insider: But what would happen if this extremely delicate deadline is not met, sir? Especially considering all of the bloodshed that continues to rise more and more as August 31st approaches? Could this lead to more retaliation from the Taliban?

Jahshan: "Good question and frankly, nobody knows. However, U.S. troops have been leaving the country and the Taliban seems to be satisfied with that. Now, there are remaining U.S. troops at the airport that are strictly there to facilitate the evacuation. Once the evacuation is complete, the remaining U.S. troops- according to the administration- are going to leave. Now, should matters be subjected to major negative changes within the near future, an obvious disagreement between the parties will surely arise and that's when the scenarios you mentioned will begin to kick in. Will the Taliban object? Will the Taliban fight back? Will the Taliban get involved physically by attacking these forces or will they appeal to international legal venues to ensure that all these forces end up leaving?”

DC Insider: So it’s all up in the air… Literally. Before we began this interview, you mentioned that the Taliban had also reached out to Turkey, along with Qatar, in hopes of finding a resolution to this bewildering dilemma. What role is Turkey currently playing in this muddled scenario, in which all sides appear to be completely unorganized, flustered, and utterly confused?

Jahshan: “Turkey was asked for assistance by the Taliban and agreed to help. [However, in the game of politics, it’s always tit-for-tat; quid pro quo.] The sole condition that the Taliban placed on that request was that Turkey would defend the airport following the U.S. troops’ evacuation so that it would be a much easier transition for Afghanistan and its citizens, along with the remaining U.S. troops and allied troops.”

Jahshan: “Forgetting the past is one thing… Being willing to do so- that's an entirely different story. I believe that both sides are going to have difficulties simply forgiving and forgetting the transition, especially following twenty years of constant aggression. That is not going to be easy for the Afghanis, and it is definitely not going to be easy for the Taliban or the Americans or other allies that served in Afghanistan during that period of time. And so it is not so much about announcing what the parties want to do; it's merely a matter of execution… The proof is in the pudding! Whether the Taliban of today is different from the Taliban of yesterday is the real question at hand. The Taliban is willing to change- as they have been repeating endlessly over the past two weeks- yet, that still remains to be seen [and so we’ll just have to sit back and watch it play out in real-time.]”

‘Fake news’ has become the new fad nowadays and so in order to gain a more diverse outlook on the entire situation, DC Insider decided to speak with Michael Pregent on the same topic, beginning with the same question that was asked to Jahshan in the beginning of this interview.

DC Insider: With the August 31st deadline simply one day away, how likely do you think that the U.S. will be able to make it out on time? Considering all of the previous times that it did not happen according to plan in other countries, what makes this deadline any different? Also, what will be the repercussions if they do not make it out on time?

Pregent: “It’s not about the troops making it out on time… It’s about getting Americans out by the 31st… Plain and simple. The troops should be able to get out with no problem. [To the U.S.’ deepest dismay,] the consequences and the ramifications are that we are going to be leaving Americans behind and we’re going to leave Afghan civilians behind. We’re literally going to leave thousands of Americans behind and we're going to be placing our trust on to the Taliban, ISIS, al-Qaeda and al-Qaeda networks to get everyone else out and this is all because of the president of the United States! Everybody's trying to cover their backs right now, everybody's trying to say that they told the president that the U.S. needed to stay longer... They’re trying to save themselves, but Biden is making the decisions.”

DC Insider: Would you consider that time is the current enemy?

Pregent: “Bad decision-making is the current enemy… The leadership out of the White House, the Pentagon, and the State Department is the enemy in this situation. They are creating a situation in which they are going to try and say that any American left behind ‘chose’ to stay. If you’re carefully listening to the language and rhetoric, [you can easily read the subtext:] “We're going to get all the Americans out that want to leave.” When the U.S. government speaks such rhetoric, it means that they’re going to continue making excuses while in Afghanistan, there are Americans that are on their knees- in front of ISIS flags- being executed.”

DC Insider: In your professional opinion, would you consider ISIS-K to be a bigger threat than time and bad decision-making?

Pregent: “No. The administration is trying to say that the biggest threat is from ISIS-K because they simply do not want to admit that the biggest threat is from al-Qaeda, al-Qaeda affiliates and the Taliban. Yes, ISIS-K is a threat but if they say that the Taliban is the threat, it embarrasses the administration because they're working with the Taliban to get all of the Americans back… That’s their quotation [and their current stance:] “We’re working with the Taliban.” If they decide to say that there's an al-Qaeda threat, then they will potentially be throwing the president under the bus. after Biden stated that al-Qaeda is gone; that there is no al-Qaeda in Afghanistan. And so they are relying on this narrative: “Holy shit! It's ISIS that we have to leave!” and that’s all bullshit. Yes, ISIS is a threat but al-Qaeda is a threat just as much as their affiliates are a threat, along with the Taliban, to the U.S. evacuation and the U.S. abandonment of Americans and Afghan special immigration visa holders and those that worked with U.S.”