Videos and photos showing several Afghan civilians dead at the Kabul airport are widely shared on the social media. 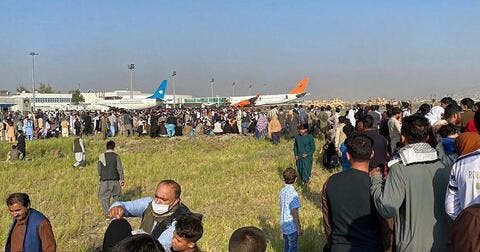 After The Taliban Takeover: Hundreds Try to Board Planes in Kabul Airport

BREAKING: Reports of several Afghan civilians dead after #US soldiers fired shots in Kabul Airport as people stormed the tarmac while US and other foreign missions tried to evacuate their diplomats. #Afganistan #Taliban pic.twitter.com/QyVgxURk3T

Reports revealed that chaos between Afghan civilians and US army forces erupted as people rushed onto planes in an attempt to escape the country after the Taliban took over keynote regions including the capital Kabul on Sunday.

The US forces are guarding the Kabul airport to make sure there is a safe eviction of its nationals and that of other foreign missions from Afghanistan.