What Will Muqtada Al Sadr do Now?

Iraq’s Supreme Judicial Council said Sunday it does not have the authority to dissolve parliament. 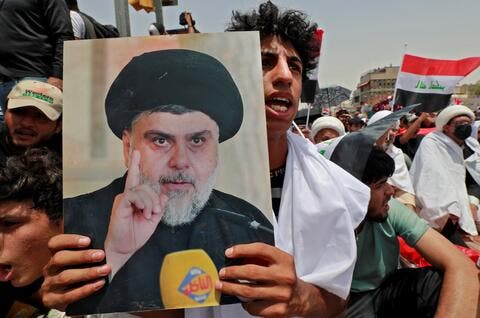 Will Iraq's Judges Listen to Muqtada Al-Sadr and Dissolve Parliament?

On Wednesday, Shia cleric Muqtada al-Sadr called on the council, Iraq’s highest judicial authority, to dissolve the assembly amid a deep political crisis in the country.

Iraqi judiciary says it has no powers to dissolve parliamenthttps://t.co/Xo9AHsW1mS https://t.co/poiOC2DCbT

The council said in a statement that it had discussed al-Sadr’s request to dissolve the Parliament and found that it has no authority to disband it.

“The Supreme Judicial Council has no jurisdiction to intervene in the affairs of the legislative or executive authorities,” the statement said.

The council, however, said that it agrees with al-Sadr's "negative diagnosis of the political situation in the country and the continuing violation of the constitution."

The judicial council noted that it “stands at an equal distance from all political parties and groups.”

Tension flared up across Iraq in recent days following the nomination of Mohammed Shia al-Sudani as a new prime minister by the Coordination Framework, a coalition of groups close to Iran.

The nomination has triggered mass protests from supporters of al-Sadr, who called for the dissolution of the Parliament and holding early polls in Iraq.

Iraq's judiciary said Sunday it lacks the authority to dissolve parliament as demanded by populist Shiite Muslim cleric Moqtada Sadr, who is engaged in an escalating standoff with political rivals.

Last June, 73 lawmakers of al-Sadr's movement resigned from the 329-seat Parliament after failing to form a "national majority" government, as the Coordination Framework hampered the Cabinet formation.

Iraq has been in a political deadlock for nine months following the country’s general elections last October, which failed since then to agree on a new government between the rival parties.

This article is adapted from its original source