Will Iraq's Judges Listen to Muqtada Al-Sadr and Dissolve Parliament?

Published August 11th, 2022 - 07:15 GMT
A supporter of Iraqi Shiite cleric Muqtada al-Sadr lifts a placard depicting him during a a collective Friday prayer in Sadr City, east of Baghdad on July 15, 2022, an event called for by the influential leader in an attempt to influence stalled talks on forming a new government. (Photo by AHMAD AL-RUBAYE / AFP)

Influential Shia leader Muqtada al-Sadr on Wednesday called on the Iraqi judiciary to dissolve the parliament by the end of next week. 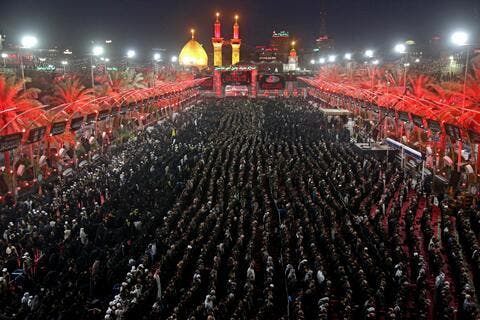 Al-Sadr in his tweet said that the Parliament will convene to dissolve itself citing that it has "blocs that adhere to the quota (system) and are involved in corruption and will not answer to the peoples' demand of dissolving the Parliament."

In the last week of July, thousands of supporters of al-Sadr stormed the heavily fortified parliament building in Baghdad for the second time. And the protesters are continuing their sit-in outside the legislature.

This move came in response to attempts by his rivals, mainly the Iran-backed Coordination Framework, to form a government with prime ministerial candidates of whom al-Sadr does not approve.

Al-Sadr went on to state that an alternative way to disband the assembly can be achieved through the judiciary, Anadolu Agency reported.

Shia leader expressed hope that the judicial authorities will "correct the path" after the constitutional deadline for the parliament to choose a president and assign a premier to form a government expires.

He urged the judiciary to "dissolve the Parliament... within a period that does not exceed the end of the next week."

On July 30, supporters of Iraqi cleric stormed parliament for the second time in a week.

The protesters again breached the high-security Green Zone in Baghdad, as they oppose the nomination of a pro-Iran rival candidate for prime minister.

Over 120 people were injured in the latest unrest.

Earlier also, Al-Sadr demanded for an early election and dissolution of parliament. "Dissolve parliament and hold early elections," al-Sadr said in a televised address from Najaf on Wednesday, signalling a deepening power struggle with his rivals that may prolong the political deadlock.

Al-Sadr recently called for the dissolution of the assembly and holding early polls amid a nine-month-old political crisis that has stalled the government formation since the October 10, 2021 elections.

Iraqi Shiite cleric Muqtada Al-Sadr derives his political weight largely from the seemingly unending support of residents of the impoverished Baghdad suburb of Sadr City. He called on thousands of his followers to storm Iraq's parliament.https://t.co/d7R6T9RlhS By @samya_kullab

Notably, Al-Sadr's bloc won 73 seats in Iraq's October 2021 election, making it the largest faction in the 329-seat parliament but, ever since the vote, talks to form a new government have stalled, and Al-Sadr stepped down from the political process. A deadlock persists over the establishment of a new government. 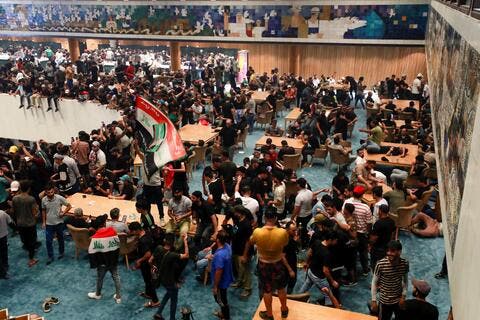 In 2016 too al-Sadr's supporters stormed the parliament in a similar fashion. They staged a sit-in and issued demands for political reform after then-Prime Minister Haidar al-Abadi sought to replace party-affiliated ministers with technocrats in an anti-corruption drive.

Mass protests erupted in 2019 amid public anger over corruption and unemployment and this current protest poses a challenge for the oil-rich country.