Who is Responsible for Attacking 2 Oil Tankers in The Gulf of Oman? 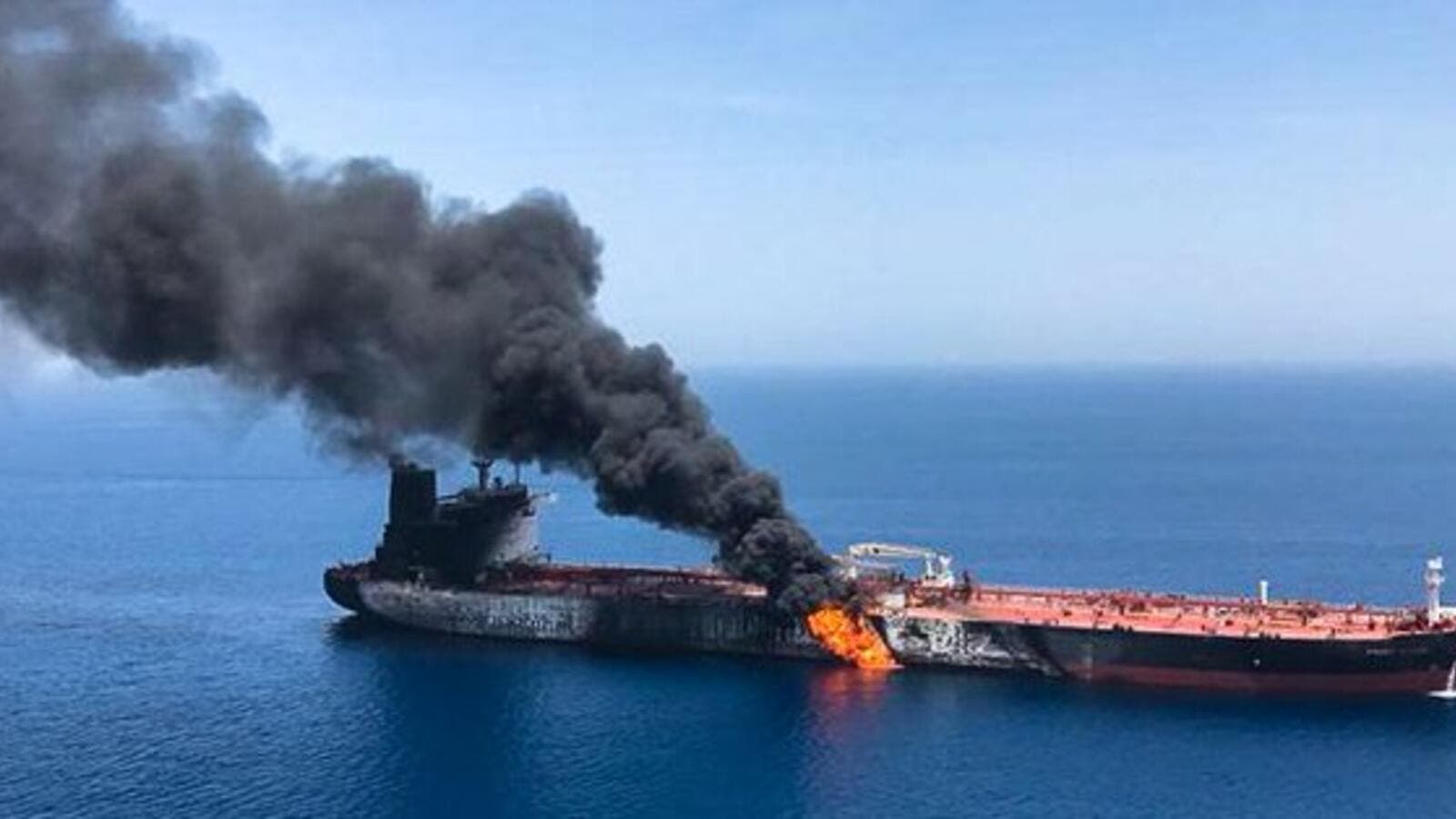 Attacks in the Gulf of Oman (Twitter)
Highlights
The second ship, the Kokuka Courageous, was attacked twice in three hours according to the president of Kokuka Sangyo.

The origins of the attacks in the Gulf of Oman remain a mystery, but the message behind the attack is as clear as day.

As if global market jitters were not bad enough already, someone decided to attack two more oil tankers in the Gulf of Oman this morning, sending the price of crude oil up and making white-knuckled diplomats exchange accusation and counter-accusations as to who was responsible.

The latest attacks follow on from last month’s attacks on four tankers which the United States and Saudi Arabia blamed on Iran, and which the United Arab Emirates (UAE) blamed on a state actor, stopping short of pointing the finger at Tehran.

The most recent attacks will likely ratchet up tensions and busy policymakers, analysts, and experts for the next couple of weeks. But who stands to gain the most from these attacks, and who could be behind it?

The two oil tankers that caught fire today were the targets of a suspected torpedo, mine, and other explosive attacks. Taiwan’s state oil refinery CPC Corp said the first vessel, the Front Altair, was torpedoed causing it to be “on fire and adrift” just off the coast of Fujairah in the UAE.

The second ship, the Kokuka Courageous, was attacked twice in three hours according to the president of Kokuka Sangyo.

Saudi Arabia and its allies will undoubtedly benefit from these latest attacks, even if it is extremely unlikely that they are behind them or instigated them.

The Arabian Gulf and its shipping routes are responsible for 35 percent of the world’s global seaborne oil shipments and 20 percent of all oil traded worldwide.

Nearly two-thirds of the world’s crude oil supply is in the region and its surrounding coastal areas, as well as more than a third of the global reserve of natural gas. The sheer fossil fuel and petroleum industry potential of the region make it one of the planet’s preeminent strategic theatres, with powers the world over vying for a piece of this most lucrative pie.

If the Saudi axis and their cash-rich lobbying organisations in Washington, London and other influential Western capitals are able to pin these attacks on Iran and its proxies, they perhaps will be able to draw in Western powers based on the premise that the global energy trade is at risk due to Iranian adventurism.

This much was argued by King Salman bin Abdulaziz Al Saud during the Mecca summit earlier this month that was attended by members of the Arab League, the Gulf Cooperation Council (GCC), and the Organisation for Islamic Cooperation (OIC).

Indeed, last month’s attacks bore similar hallmarks of sophistication, and it is highly unlikely that anyone short of a state actor or a state-sponsored group could have carried out the operation. Due to the reported use of torpedoes and mines, as well as the location past the Strait of Hormuz and off the coast of Fujairah, it is likely that today’s attacks were orchestrated by the same perpetrator.

Saudi Arabia and its allies will seek to argue that the perpetrator is, of course, Iran. The argument will essentially go along the lines of Iran wanting to send a message to the United States that its “maximum pressure” sanctions campaign and attempts to force it to renegotiate the terms of the Iran nuclear deal, which is about as on fire and adrift as the unfortunate tankers that were attacked earlier today.

However, that certainly does not mean that Riyadh is wrong on the matter, even if it does stand to benefit from the latest attacks. If anything, the attacks provide it with vindication for its firm accusatory stance against Tehran, blaming the ayatollahs for instigating chaos and instability in the region and beyond.

These tanker attacks come after US CENTCOM chief General Frank McKenzie said that Iran was forced to “step back and recalculate” after American deployments in the Gulf were supposed to have scared them off.

Instead, Iranian Foreign Minister Mohammad Javad Zarif suggested that far from his country being responsible, an attack on a Japanese tanker as Japanese Prime Minister Shinzo Abe was visiting Tehran for high-level talks was “suspicious”.

If Zarif is suggesting that Saudi Arabia and its allies on the Gulf were responsible, then that would be an extraordinarily difficult story to sell.

For once, incompetence is actually a boon for the GCC powers which lack the sophistication and capabilities to orchestrate such attacks and are almost certainly not behind these attacks as they prefer to use oil cartel OPEC to manipulate prices and to spend billions on US military hardware to convince Washington to come to their aid.

Remember, we are talking about people who even Trump described as having executed a cover-up that “was the worst in the history of cover-ups” concerning the brutal murder of Saudi journalist Jamal Khashoggi last year.

Instead, it is far more likely that responsibility lies with the country that has established a historical precedent of attacking oil tankers in the Iran-Iraq War in the 1980s, and had very recently threatened to close the Strait of Hormuz so that if Iran could not export oil, no other country could.

After all, Iran wants to send a message that it will not back down on the Iran nuclear deal and it will attack US interests and destabilise the global economy if it feels it is being forced to kowtow to American sanctions. That message came loud and clear when four tankers were sabotaged last month, two tankers were set ablaze today, and the Iran-backed Houthi militants in Yemen repeatedly struck GCC oil facilities and fired a cruise missile at Saudi’s Abha International Airport yesterday leading to the wounding of 26 civilians.

It now only remains to be seen how the United States and its allies in Saudi Arabia, the UAE, Bahrain and perhaps even Israel respond to these latest escalations.

I suspect that this will not be the last incident we see off the coast of Fujairah until the issue of Iran’s nuclear programme and regional interference is settled with more finality.