Published November 24th, 2021 - 12:27 GMT
Lebanon's Minister of Information George Kordahi speaks during a press conference at the presidential palace in Baabda, east of the capital Beirut, on September 13, 2021. Lebanon's newly-formed government held its first meeting to discuss ways of rescuing the country from one of its worst ever economic crises. (Photo by ANWAR AMRO / AFP)
Highlights
According to reports; the Lebanese cabinet will not be sacking minister George Kordahi. 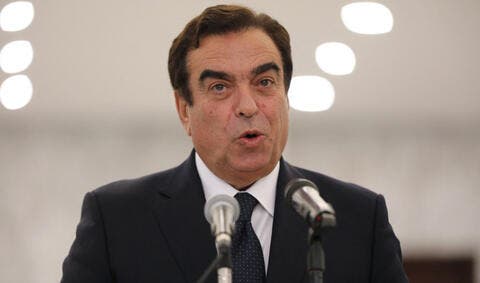 The sources affirmed to the TV channel that Kordahi’s sacking won’t be discussed in the Lebanese Cabinet for voting.

The Lebanese newspaper, Al-Jumhuriya, said that President Michel Aoun intends to visit Qatar, coinciding with the escalating crisis with the Gulf countries due to the statements of Lebanon's Minister of Information, George Kordahi, regarding the Yemen war. pic.twitter.com/BrDScXqPQm

“There is almost an agreement on the name of the minister who will replace Kordahi,” the sources revealed, adding that the minister-to-be is close to Marada Movement chief Suleiman Franjieh.