Will The Saudi-Lebanese Dispute Strengthen Hezbollah?

Published November 3rd, 2021 - 09:48 GMT
A newspaper vendor arranges newspapers, bearing headlines of the diplomatic row with Saudi Arabia, at his stall in the Lebanese capital Beirut on October 30, 2021. (Photo by ANWAR AMRO / AFP)

Lebanon, facing one of the worst economic crises in the world, received a painful blow when Saudi Arabia, angered by critical comments concerning its military intervention in Yemen, decided to expel its ambassador and ban its imports. 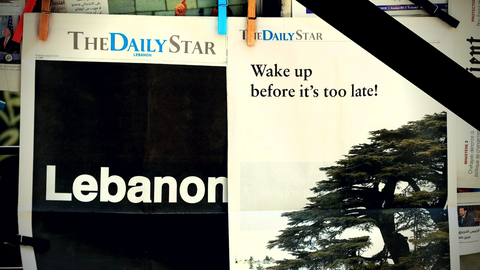 The Saudi move on Friday further strained tense relations with Lebanon, whose new government led by Prime Minister Najib Mikati has been counting on improving ties with the Gulf countries to secure crucial financial assistance to prevent the country's total collapse.

Bahrain, Kuwait and the United Arab Emirates quickly backed Saudi measures, recalling their own ambassadors from Beirut and asking Lebanon's envoys to leave.

The diplomatic row was sparked by Lebanese Information Minister George Kordahi, who described Yemen's seven-year war as "futile" and said Iran-backed Houthi rebels were defending themselves against "external aggression."

Kordahi's remarks, recorded in August -- one month before he was named minister in Mikati's government -- and broadcast last week, were the straw that broke the camel's back after a series of events over years that have soured relations between the two countries.

"The relations between Lebanon and Saudi Arabia were not good even before Kordahi's comments. Ties were already bad," Hilal Khashan, a professor of political science at the American University of Beirut, told UPI.

Saudi Arabia, once Lebanon's main financial and political backer, has been increasingly concerned about the rising influence and dominance of Iran's proxy in Lebanon, the heavily armed Hezbollah.

Saudi Arabia started to distance itself from Lebanon after a "presidential settlement," backed by then-ally former Prime Minister Saad Hariri, who supported the election of Michel Aoun, Hezbollah's main Christian ally, as Lebanon's president in 2016.

A year later, Hariri, then prime minister, was reportedly "forced" to submit his resignation during a trip to Riyadh. He resumed his function after French President Emmanuel Macron intervened to allow his return to Beirut a few days later.

Saudi Arabia started a financial blockade on Lebanon, banning Lebanon diaspora from sending money to Lebanon through money exchange offices such as OMT, MoneyGram, and so on.

Harsh criticism of Saudi Arabia and insulting remarks were repeatedly voiced by Hezbollah chief Hassan Nasrallah over the years. Moreover, former Foreign Minister Gebran Bassil, a Hezbollah ally and son-in-law of Aoun, repeatedly adopted Hezbollah's positions, especially when he voted against a semi-Arab consensus on Syria at an Arab League meeting. Last May, former Foreign Minister Charbel Wehbe had to quit after provoking the anger of Gulf states whom he blamed for the rise of the Islamic State.

"It is an accumulation, with Lebanon adapting Hezbollah's positions ... and this has basically escalated the situation to where we are now," Mohanad Hage Ali, an analyst and fellow at the Beirut-based Carnegie Middle East Center, told UPI. "The Gulf countries led by Saudi Arabia are basically saying, 'Enough.'"

"These measures are impacting the population, further weakening the state and ironically could be benefiting Hezbollah: bringing Lebanon closer to the Iranian and Syrian regimes/axis," he said.

By imposing a ban on Lebanese imports, that reached $1.04 billion to Gulf Cooperation Council countries in 2020, many see the new Saudi measures as "punitive" and harmful to the Lebanese population rather than to Hezbollah.

However, Saudis could no longer sustain such an approach against them. They want to put a red line.

While the United States has been imposing sanctions on Hezbollah for the past two years, targeting its source of funding and punishing individuals and institutions behind it while trying not to harm Lebanon's economy, what the Saudis are doing "is very different," said Riad Tabbarah, Lebanon's former ambassador in Washington.

"They are punishing Lebanon, by expelling its ambassadors and stopping its exports," Tabbarah told UPI. He explained that Riyadh's new measures were not in line with the U.S. and French approach toward Lebanon.

"France is talking to Hezbollah day and night and the U.S. has an open channel to bring gas from Egypt via Syria" to help ease Lebanon's acute power crisis, Tabbarah said. "The new Saudi measures are a defensive reaction. Saudis could no longer sustain such an approach [from Lebanon] against them and they want to put a red line."

With Kordahi not willing to submit his resignation to help defuse the growing tension with Saudi Arabia and its Gulf partners, Mikati received a boost from the United States and France to maintain his government in order to secure some stability in the country.

"The Americans are not really taking the Saudi anger seriously. They are committed to the maintenance of the Mikati government for a reason," Khashan said.

In September, Mikati succeeded in forming a new government, ending more than a year of stalemate that accelerated the collapse of the crisis-ridden country and further plunged the population into poverty. If he resigns, forming a new cabinet will be difficult and could lead to the cancellation of general elections, scheduled for March 27.

"Hezbollah does not care and does not lose anything if Saudis impose draconian measures on Lebanon," Khashan said. "The Saudis are frustrated and venting their anger at the weakest link, which is Lebanon."

He, however, noted that Saudi-Gulf-Lebanon relations "will not get worse but will not get any better."

At the end, it all depends on the Vienna nuclear talks that are set to resume at the end of this month.

"The main issue in Vienna is not .. whether Iran is to produce a nuclear bomb. There are other issues: Iran's missiles and proxies, like Hezbollah," Kashan said. 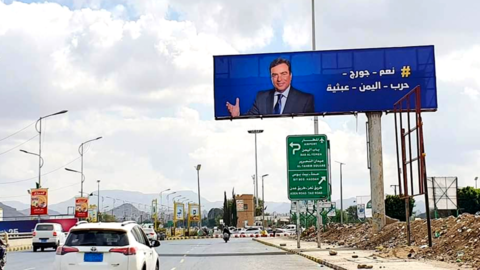 Who Is Behind Yemen’s Billboards in Support of Lebanese Minister?

Ruining countries like Lebanon and making them "an easy bite" is what Iran needs "to take over completely," Khashan said.