Published May 6th, 2021 - 07:58 GMT
In this file photo taken on February 8, 2021, protesters gather to demonstrate against the February 1 military coup, in downtown Yangon. STR / AFP
Highlights
Hundreds on NGOs call the UN to impose arms embargo on Myanmar amid continuous clashes with protesters.

Amnesty International and Human Rights Watch, among over 200 non-governmental organizations, have urged the United Nations Security Council to impose an arms embargo on the junta in Myanmar for its lethal crackdown on anti-coup protesters. 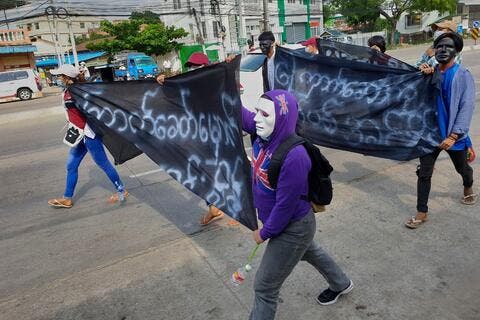 “No government should sell a single bullet to the junta,” the NGOs said in a joint statement on Wednesday.

The military government has been ruling the country since ousting the civil government of Aung San Suu Kyi in a coup on February 1.

“No government should sell a single bullet to the junta" while the Myanmar generals uses them to shoot demonstrators, say 200 NGOs. But the Chinese government is blocking the UN Security Council from imposing the requested "global arms embargo" on Myanmar. https://t.co/5mcMl42jYx pic.twitter.com/BUe9Sw4vbR

“Imposing a global arms embargo on Myanmar is the minimum necessary step the Security Council should take in response to the military's escalating violence.”

The military said on the coup day that it had arrested Suu Kyi and her associates over accusations of voter fraud in favor of her National League for Democracy (NLD) party in the November 2020 elections.

The military placed commander-in-chief Min Aung Hlaing in power and pledged to hold fresh elections in a year and hand over power to the winner.

The Assistance Association for Political Prisoners (AAPP) advocacy group says that nearly 770 people have been killed by security forces since the coup.

Lawrence Moss, a senior UN Advocate for Amnesty International, said, “Mere condemnation by the international community has had no effect.”

“It is time for the UN Security Council to use its unique powers to impose a comprehensive global arms embargo in order to try and end the military’s killing spree.”

In a separate statement, Louis Charbonneau, with Human Rights Watch, said, “The council's occasional statements of concern in the face of the military's violent repression of largely peaceful protesters is the diplomatic equivalent of shrugging their shoulders and walking away.”

China, which holds veto-wielding power on the Council, has expressed opposition to any sanctions, and reaffirmed its support for a political solution to the crisis in Myanmar.

❗️"Let's be very clear. #NotOneMoreBullet, bayonet or bomb should be sold to #Myanmar's military. A global arms embargo is the very least the #UNSC can do."

On Monday, China's envoy to the United Nations, Zhang Jun, said in a press conference that there should be support for efforts by the Association of Southeast Asian Nations (ASEAN), to which Myanmar is a member, to find a solution.

“We are not in favor of imposing sanctions,” Zhang said. 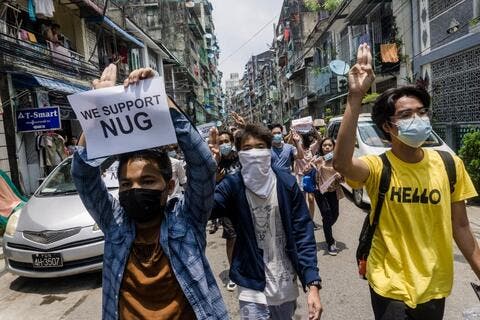 Myanmar: Death Toll in Military Crackdown up to 753

Myanmar was ruled by the military from 1962 until 2011, when Suu Kyi ended the junta rule.

Her international reputation has been tarnished because she defended a military campaign of "genocide" against the minority Rohingya Muslim community in 2017.

Who Is Maria Giovanna Adamo Who Can Yaman Is Rumored to Be Dating?