Published October 28th, 2021 - 09:30 GMT
A Sudanese youth draped in the national flag stands by burning tyres during a protest in Sudan's capital Khartoum on October 26, 2021, to denounce a military coup that overthrew the transition to civilian rule. (Photo by AFP)
Highlights
World Bank halts Sudan operations in blow to coup leaders

The World Bank announced to halt payments for operations in Sudan after the country's military coup and taking power from a transitional government in an apparent coup d'état. 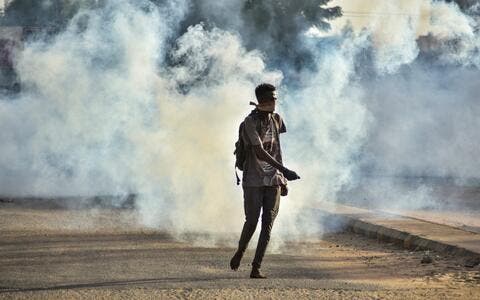 World Bank President David Malpass announced the decision in a statement on Wednesday, saying the institution "[has] paused disbursements in all of its operations in Sudan and it has stopped processing any new operations" as it closely monitors and assesses the situation.

"I am greatly concerned by recent events in Sudan, and I fear the dramatic impact this can have on the country's social and economic recovery and development," he said.

Malpass further expressed hope that peace and the integrity of the transition process would be restored in Sudan, so that the African country "can restart its path of economic development and can take its rightful place in the international financial community."

Sudan achieved full re-engagement with the World Bank in March and gained access to $2 billion in financing after isolation from the international financing system in over three decades of rule by former President Omar al-Bashir.

Abdallah Hamdok, prime minister in the dissolved transitional government, had touted the re-engagement with the World Bank as a major accomplishment and was depending on the funding for several large development projects.

The latest decision by the World Bank will be a setback to Sudan's military leader Abdel Fattah al-Burhan.

The International Monetary Fund (IMF) has also said it is following events in Sudan carefully after the military coup that saw major donors suspend aid, but stressed "it is premature to comment on the implications of recent events" in the country.

On Monday, Burhan ordered the dissolution of the government and declared a state of emergency. He also vowed to form what he called a competent government.

Burhan has denied that the army's seizure of power constitutes a coup, saying the transitional government was overthrown to avoid a civil war in the African country.

Military forces in Sudan detained Hamdok on Monday after besieging his house. He was taken to an unknown location. Several members of the country's civilian leadership were also taken into custody.

Burhan's declaration and the arrests drew large crowds of protesters to the streets in different cities across Sudan. The protests have, however been marred by violence, and several people have been killed in clashes with security forces.

In a post on its Twitter account on Wednesday, the UN mission in Sudan said Hamdok was in good health when visited by envoys from France, Germany, Norway, the UK, the United States, the European Union, and the United Nations.

Meanwhile, doctors, pilots, and state oil company workers have joined the civil disobedience campaign to back the stalled democratic transition and voice their opposition to the military takeover of the country.

Central Bank employees have also stopped work in a further setback for the functioning of the economy.

Scattered protests took place in the capital, Khartoum, on Wednesday and intensified at night. However, no bloodshed was reported.

The World Bank has halted disbursements for operations in Sudan in response to the military's seizure of power from a transitional government. https://t.co/R1PesyqaWH

"We want civilian rule. We won't get tired," one of the protesters said.

In Bahri, witnesses told Reuters that protesters had been met with tear gas and heard gunshots in the evening.

In the northeastern city of Atbara, protesters marched and chanted, "Down with the military regime."

Separately, the African Union has strongly condemned "the seizure of power" in Sudan, saying it is suspending Khartoum from all its activities until civilian rule is restored in the country.

The continent-wide bloc branded the military takeover as "unconstitutional," saying Sudan would be suspended from all AU activities "until the effective restoration of the civilian-led transitional authority."

Earlier in the day, the EU also condemned the "unconstitutional change of government in Sudan," saying it continued to recognize the transitional government.

In a joint statement, the EU Delegation to Sudan demanded that signatories' ambassadors be allowed to meet the ousted prime minister and his cabinet members, saying it recognized them as constitutional leaders.

It also spoke of "the importance to respect the fundamental right to demonstrate by all Sudanese citizens and the need to respect all other human rights of all citizens."

"The security forces and other armed elements must refrain from violent attacks at all times, and peaceful protesters must be protected," the statement read.

The international community has already condemned the military takeover, with the UN's High Commissioner for Human Rights Michelle Bachelet warning that Sudan risked a return to oppression.

UN special representative Volker Perthes has met Burhan, telling him the body wants to see a return to the transition process and the immediate release of all those arbitrarily detained, according to UN spokesman Stephane Dujarric. 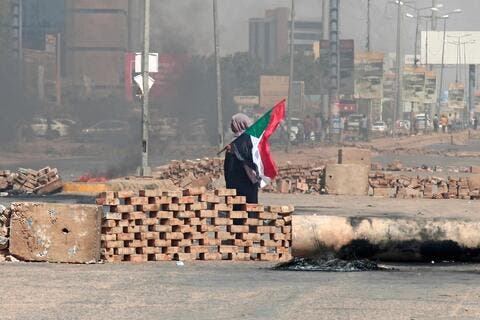 Burhan has already said the army had no choice but to sideline the politicians who he said were inciting people against the armed forces.

Late on Wednesday, Sudan's state TV reported that Burhan had relieved six Sudanese ambassadors from their posts, apparently because they had rejected the military takeover. The six were envoys to the United States, the European Union, China, Qatar, France and the head of the mission to Geneva.