In Yemen: 100 Houthis Killed Outside Marib

About 100 Houthis were killed since Friday evening in clashes with government troops in contested areas outside the central Yemeni city of Marib, military officials said on Saturday. 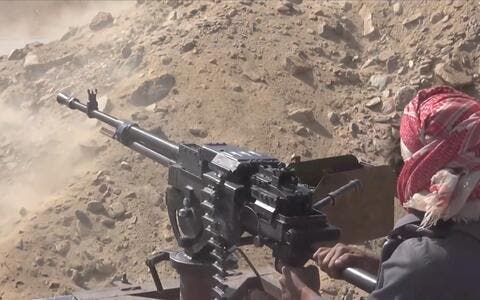 The clashes broke out as the Iran-backed militia intensified its artillery shelling and ground attacks on government-controlled locations in Al-Kasara, west of Marib, as part of its push to seize control of the city, Rashad Al-Mekhlafi, a military official at Yemen’s Armed Forces Guidance Department, told Arab News.

At least 100 #Houthis have been killed since Friday evening in clashes with government troops outside the central #Yemeni city of #Marib, military officials say
pic.twitter.com/U1hYw7zk70

Al-Mekhlafi said the bodies of at least 100 fighters had been abandoned in mountains and rough areas in Al-Kasara, and that the rebels had been forced to stop their attacks after failing to break through the government's lines of defense.

“The Houthi attack (in Al-Kasara) began at nearly 8 p.m. on Friday and ended on Saturday afternoon. They used different kinds of weapons and dispatched waves of fighters.”

Al-Mekhlafi added that Arab coalition warplanes had played a vital role in disrupting Houthi attempts to bring in military reinforcements to Marib and targeted their military locations and gatherings.

There was also fighting in the south and west of Marib, in Jabal Murad, Juba, and Al-Abedia.

Military officials denied Houthi media reports that residents in the besieged district of Al-Abedia had agreed to allow the militia to control it in exchange for a safe corridor for government troops.

“People there do not trust the Houthis. The Houthis launched many attacks to seize control of the district,” Al-Mekhlafi said.

The siege is in its third week, with Houthis trying to force troops and allied fighters to surrender.

The Houthis have banned humanitarian assistance from reaching more than 35,000 people and blocked residents from leaving or entering the district.

There have been warnings from local organizations and officials about starvation if the Houthis continue with the siege.

The fighting in Marib comes as US Yemen envoy Tim Lenderking on Friday began a new diplomacy shuttle in the region to revive peace efforts to end the war in Yemen and discuss ways to stop the offensive, the US State Department said.

The US envoy, who touched down in Jordan on Friday, is visiting the UAE, Saudi Arabia, and Oman. He is meeting officials from those countries, along with Yemeni government officials and civil society representatives.

“During his meetings with international partners, Special Envoy Lenderking will address the consequences of the continued Houthi offensive in Marib, which is exacerbating the humanitarian crisis, killing civilians, and defying the international consensus on the urgent need for a peaceful resolution to the conflict,” the department said.

Thousands of Yemenis have been killed since February, when the Houthis renewed an offensive to control the city.