ALBAWABA - A video was shared online showing papers with instructions released by Algerian authorities to lecture people about the Pride flags and their symbols with the aim to tighten rules against the country's LGBTQ+ community. 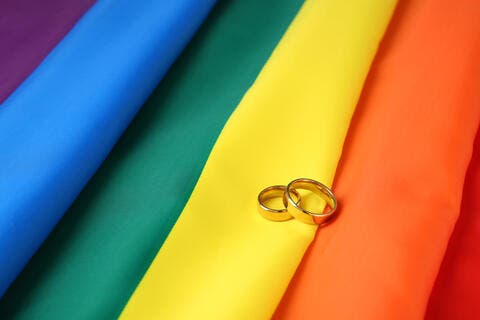 In the clip, an unidentified man at the National Gendarmerie Command allegedly said that police and trade directorate officials are carrying out campaigns against LGBTQ+ members.

Now must be the most horrific times for #LGBTQ community of Algeria https://t.co/w19VSm9uyf

Papers were distributed to people to differentiate between the rainbow colors consisting of seven colors, and the LGBTQ+ Pride flag, which is made of six colors.

The slogan: "I'm a Muslim and these flags and symbols don't represent me," was written above the LGBTQ+ flags.

Algerian authorities asked consumers to boycott any item that carries a logo or colors of highlighted flags as they are against the values of the Algerian community and Islam.

The man, whose face wasn't showing in the clip, claimed that even some imported Qurans carry the colors of the LGBTQ+ flag. In the footage, the man added that God has created man and woman and there's nothing in between.

Some people decried the move by Algerian authorities to tighten rules against LGBTQ+ members.

One wrote: "we have taken the one-way path that leads us to who knows where or what."

Another warned LGBTQ+ members saying that their life might be in danger in Algeria.