Published June 27th, 2022 - 07:48 GMT
Lebanese victim Fátima Fouad took to social media to speak up about the 2019 incident for the first time. (Ma3zef Logo)
Highlights
Ma3azef released a statement expressing regret over the incident and pledging commitment to prevent any future violations in the future.

Social media posts by the Lebanese manager of Barzakh bookshop and space in Beruit Fátima Fouad have driven major attention online as she narrated detailed anecdotes of the night she said she was assaulted by a Jordanian-Palestinian musician and another Egyptian one. 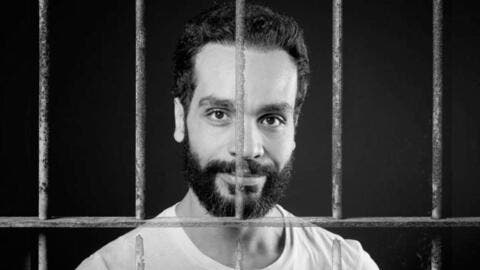 Fátima Fouad's Facebook, Twitter, and Instagram posts that were posted on Saturday gave full records of what she went through on 2020 New Year's Eve, during a music event organized by Lebanon's Ma3azef magazine.

Detailing the horrors she lived during that night, Fátima Fouad accused Ma3azef of disregarding her claims when she later reported the rape case to organizers.

Throughout Fátima Fouad's now-deleted testimony, she referred to the two people who attacked her with their initials, B.S and A.M, explaining that the first is a Jordanian-Palestinian musician and the other is an Egyptian one.

Translation: "Initial statement by Ma3azef organization in light of the crime against Fátima Fouad on New Year's Eve party 2019 in Beruit".

Moreover, many social media users looked up names of musicians who took part in the New Year's Eve party organized by Ma3azef by the end of 2019 and concluded that the musician she accused of rape is Jordanian-Palestinian Bashar Suleiman known by the name Lil Asaf, in addition to the Beruit-based Egyptian musician and singer Aya Metwalli who was accused of drugging her.

Translation: "I demand the removal of my article published on Ma3azef, hoping that all writers follow in my steps, first and foremost to ensure collective punishment for the organization that had allowed the crime to proceed against the victim by choosing to side with the criminal. They should pay for this choice." 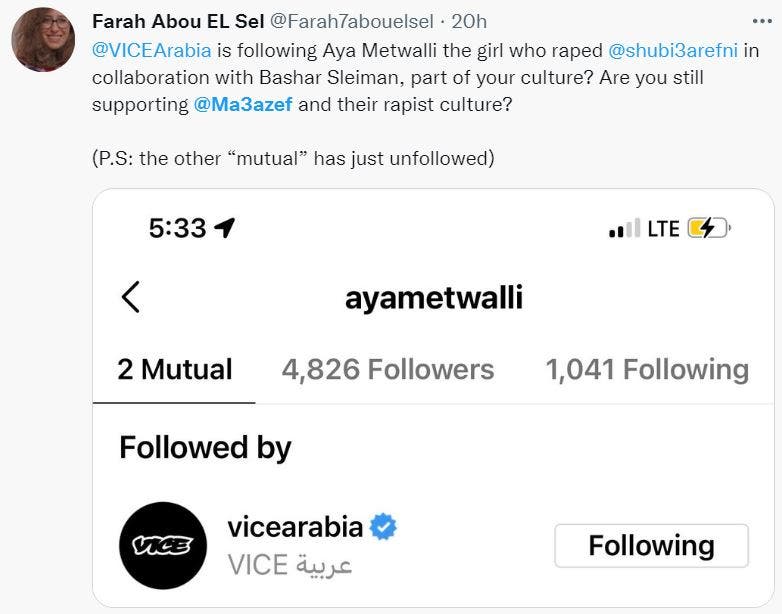 Expressing solidarity with Fátima Fouad, online people called for a full boycott of Ma3azef and its content, using the hashtag #فلنقاطع_معازف (boycott Ma3azef), including several writers who demanded the removal of their own articles from the website.

Translation: "Based on testimony by survivor Fátima Fouad yesterday which condemns, in addition to artists perpetrators, the administration of Ma3zef for the silence, complicity, and inactions towards mentioned artists. This comes at a time the AFAC - The Arab Fund for Arts and Culture prepares for the "Meidan" event to celebrate its 15th anniversary, for which we [...] announce ending our partnership with Ma3azef, effective immediately".

Ma3azef later issued a statement condemning Fátima Fouad's rape, expressing regret for not taking action earlier, and pledging to prevent any similar incidents in the future.

The statement followed several posts by organizations that announced halting already planned collaborations with Ma3azef based on Fátima Fouad's testimony.

Two days after Fátima Fouad's now-deleted testimony, Egyptian musician Aya Metwalli took to her blog to defend herself against assault accusations, starting with an apology to Fouad for "the amount of pain that F.F went through", adding: "I apologize for whatever it is I did intentionally or unintentionally that was consequential of this pain and I wish that one day she would heal and be able to forgive me for my unintentional involvement in her part of the story". 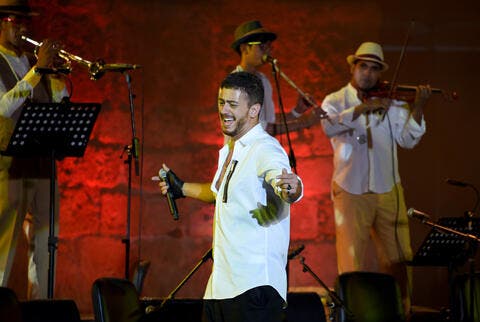 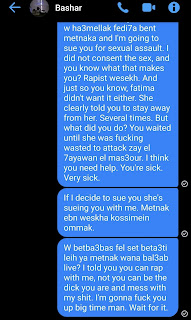 Aya Metwalli added that her interaction with Fátima Fouad that night started consensually before detailing how events took a different turn with Bashar Suleiman approaching and assaulting them.

To support her defense, Aya Metwalli posted 15 screenshots of text messages showing the interactions she had with both Fátima Fouad and Bashar Suleiman following that party, including ones where she expresses support for Fátima Fouad over what she went through, in addition to ones where she slams Bashar Suleiman for the way he behaved during the event.