International Women’s Day; the world has set March 8th every year to celebrate women’s day. On this day people across the globe usually mark women’s social, economic, cultural, and political achievements as well as the positive change in women’s situation every year towards gender equality and women’s empowerment.

However, let’s talk more about the other side of women’s current status in the Middle East, lost rights, as well as how crimes and violence against females have been on the rise during the past years especially after the pandemic.

No more stigma.
No more silence.
No more stereotypes.
No more discrimination.
No more systematic barriers.
No more harmful gender norms.
No more violence against women and girls.

Jordan has reported an increase in crimes against women last year; the country reported 18 murder cases against females only in 2020. During the Coronavirus pandemic, domestic violence cases have also risen. 800 cases were reported in 3 months only. 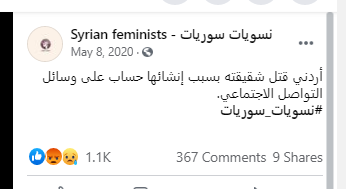 According to an Algerian Feminist group who call themselves Towards A Collective Female Awareness, Algeria has reported a bad year in terms of crimes committed against women reporting 39 crimes last year. In 2019, 60 crimes were announced. However, the group says, “this is only the outlined numbers and we think the unsaid number is much more than reported.”

Translation: “"Femicide is part of a larger crime, one in a series of successive and mutually reinforcing episodes in affirming its oppressive and oppressive decision against women." Women whose lives are violated: Femicide is on the rise in Algeria -”

Lebanon is in fact not super different from Jordan or Algeria when it comes to women’s rights, equality, domestic violence and honor crimes. According to Human Rights Watch’s report, the Lebanese government are failing to protect women and girls from violence and end discrimination against them.

Under Covid lockdown, domestic violence against women and girls in Lebanon has increased. Around 60% of women who contacted Lebanese women’s protection non-governmental organization KAFA’s hotline for the month of March were doing so for the first time; the country reported 4,127 violence cases in 2020, up from 1,375 in 2019, according to ABAAD data.

As more people are staying at home due to #COVID19, a surge in domestic violence has been reported across the world. @UNODC calls for urgent measures to curb escalation of gender-based violence through the course of the #coronavirus pandemic. https://t.co/imRPfmyXY4 pic.twitter.com/f2xUTW3wse

Parliament passed 2 laws today: criminalizing sexual harassment& modifications on law 293 on domestic violence. A win despite the gaps in both; feminist movement will continue the fight until endorsing all needed protection measures&laws to end violence against women. #Lebanon pic.twitter.com/VMPYoRCkmE

The nationwide lockdown in Iraq has lent women in terrible situations due to unfinished war and a continuous economic crisis in the country as statistics showed a spike in domestic violence against females. Data revealed that violence rose 30% since the curfew while in some areas it jumped into 50%.

In conjunction with International Women's Day, Turkish female activists have organized a protest to stop violence against women in Istanbul regarding the fact that around 300 crimes were announced in 2020.

Translation: "Turkey ranks second in the world in human rights violations and violence against women, which has increased to reach 28 femicide cases in the last month only."

Syria has been suffering around a decade old civil war which has caused supper difficult humanitarian situations for people to live in. However, females are always the most to suffer. At least 1.6 million people are living in internal displacement camps or settlements; 80% of whom are women and children, UNFPA reported.

SNHR’s chairman @FADELABDULGHANY on the International Day for the Elimination of Violence against Women 2020#Syria #OrangeTheWorld #GenerationEquality pic.twitter.com/rYKQD6H4xX

Despite women’s harsh situation in the Middle East and the challenges they have to go through to reach their simplest rights; activists in the region shall never give up and must continue striving until gender equality is achieved; while the governments’ role lies in making major law reforms to end gender-based violence, halt honor crimes, and assure equal living conditions for both females and males.