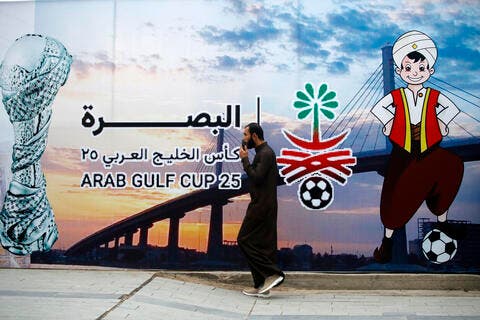 Is it Persian Gulf, or Arabian Gulf?

The clip was taken during an honoring ceremony by the PMF to the Iraqi team for its victory against Oman (3-2) in the 25th Arabian Gulf Cup, which was held in the southern Iraqi port city of Basra.

The organization's media directorate shared the video saying a celebration was held to mark the victory of the Iraqi national team in the Khaleeji Zain 25. Goalkeeper, Jalal Hassan, appeared in the footage while raising the picture of the former deputy leader of the PMF during a memorial photo for the team members.

Many reactions emerged online as people questioned the reason for rising the photo of al-Muhandis adding that sports must be separated from politics.

"What is the message that they are trying to tell," a person commented on Twitter. However, many others showed support for the Iraqi team members.

Abu Mahdi al-Muhandis was killed in a drone attack by the United States at Baghdad International Airport on Jan. 3, 2020. He died along with Iranian general Qasem Soleimani, the former commander of the Quds Force.

Soleimani and al-Muhandis were killed in a targeted U.S. drone strike in Iraq on the orders of former U.S. President Donald Trump.

The poster for Kıvanç's new series is here

Who is 1st woman pastor in Middle East?