Published July 5th, 2021 - 08:21 GMT
Italy was amongst the first few countries in the world to experience a health crisis caused by the virus in March 2020. (Twitter: @wantedinrome)

In a kind gesture meant to thank medical and healthcare professionals for their hard work during the COVID-19 crisis that has hit Italy hard ever since the virus broke out in the spring of 2020, Italy has unveiled a new two-euro coin showing two medical staff members and the word "Grazie," Italian for "Thank you." However, the coin still sparked controversy online. 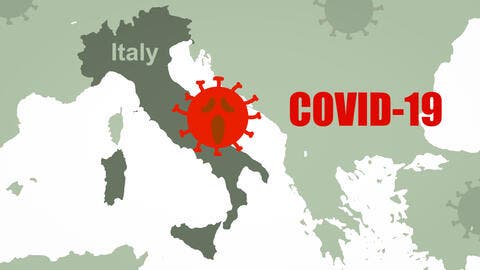 COVID-19 First Outbreak May Have Happened in Italy In November 2019, Study Shows

Grazie: #Italy honours its frontline health workers - heroes in the nation's #COVID19 battle - with a special €2 coin. There will be 3 million coins minted and they are due to come into circulation by the summer. Grazie. 🙏 ♥️ 🇮🇹 https://t.co/7R2FLE74iw #medicine pic.twitter.com/q7DPVxxLnQ

During the very first weeks of the global outbreak of the novel coronavirus, Italy was amongst the countries suffering severe cases daily and loosing thousands, thus making the whole world sympathize with its people.

So far, more than 4 million people in Italy have tested positive for COVID-19, of which more than 128,000 people lost their lives, especially elderly patients.

Yet, the recovery of the whole nation over the past few months with the pandemic being under better control compared to the spring of 2020 have inspired authorities to take a decision to show appreciation to individuals who have put every effort to help rescue Italy out of the unprecedented health crisis; that is the country's medical and healthcare professionals.

This is a noble and well-intentioned gesture.
But it tells a lot the fact that, in 2021, the female picture is still portrayed as smaller and behind the male one... And either no one noticed it or no one found it potentially problematic, before minting the coin…

Featuring male and female medical professionals on a new 2-euro coin with a "Thank you" message in Italian, many people have celebrated the medical sector and its sacrifices for the country. The coin will be printed in about 3 million pieces and is expected to be traded with this summer.

However, some online commentators noted that the coin shows the male doctor in front of the female one and in a bigger size, which urged them to call for a more equal representation of women who had very equal contributions during the health calamity.

As a woman I disagree. 1. Shorter to suggest it is a woman (yes on average we are shorter, so what?); 2. Has stethoscope, which suggests she’s a doctor; 3. Pictured displaying a very self confident body language.

I see no problem with that 😉 https://t.co/Q3AOFTGRuS

Meanwhile, many counter-voices argued that the smaller portrayal of the woman is more linked to women being "relatively shorter than men," and that "it has nothing to do with equal representation."