A video showing a person wearing a long "thob" with long brown hair and beard while holding a huge cross has stirred debate on social media as people claimed he was Jesus Christ participating in the Ashura day. 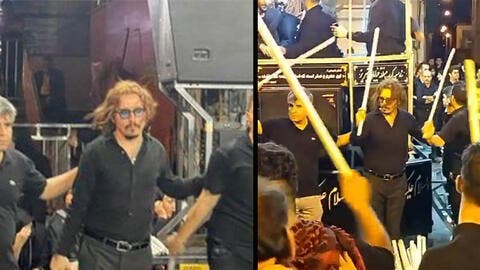 Users have widely shared a video of a man in Karbala's Iraq while performing Ashura rituals who was said to represent Jesus Christ.

Thousands of social media comments have emerged debating the reason behind adding this character to the Ashura event in Karbala claiming that Iraqis have gone to the extreme with their celebrations this year.

Not only the video of the man with the big cross was shared on social media. However, multiple other videos showing other prophets including Noah went virally online.

Earlier photos and videos of an Iranian man have gone wild online from the Ashura event in Tabriz as people mistaken him with the American actor Johnny Depp as they look super similar.

The man, later on, turned out to be an Iranian, and his name was recognized as Amin Sa'les who works as a model.