In a photographed bombshell, the Daily Mail has published several photos of former US president Bill Clinton receiving a massage by a 22-year-old victim of disgraced financier and convicted sex trafficker Jeffery Epstein, during a trip to Africa aboard Epstein's private jet.

This is just the beginning. Ghislaine Maxwell knows it all. Now if they can just keep her alive and get her to talk.... https://t.co/pwJMNhsHi7 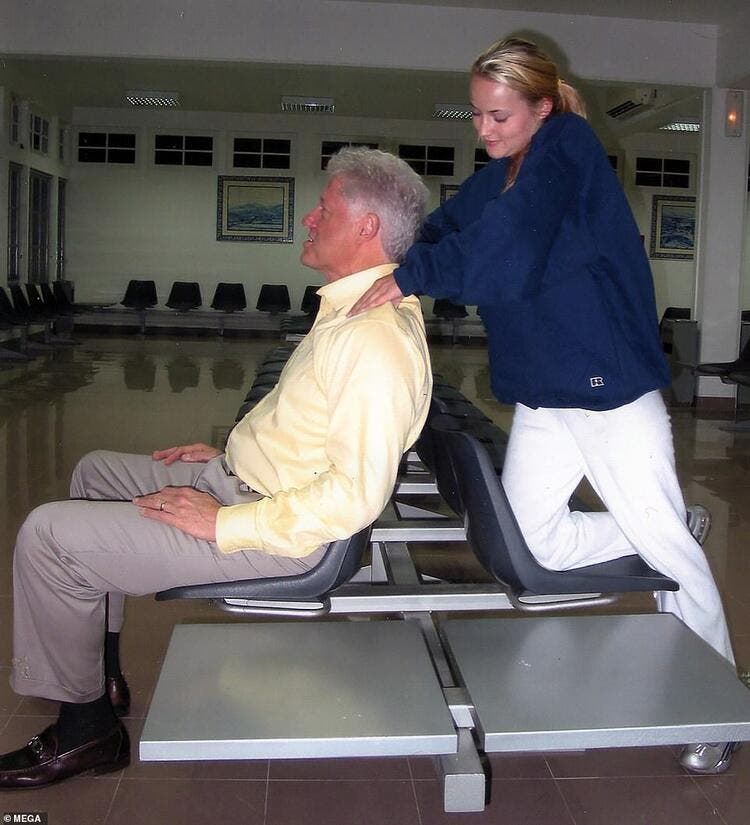 Photo courtesy of The Daily Mail

Along with a lengthy report about the 2002 trip, taken by Epstein and Clinton accompanied by Epstein's long-time associate and British socialite Ghislaine Maxwell and  22-year-old Chauntae Davies, who was a sex slave allegedly lured by Epstein and Maxwell for years.

In the photos, the Daily Mail's photos depict Clinton, who can be clearly seen sitting while Davies massaged his neck in a small airport in Portugal, while their airplane got refueled during "a humanitarian trip" in some African countries in 2002.

The report points out that the former president "had complained of a stiff neck after falling asleep on Epstein's Lolita Express," which is why Davies, a massage therapist was instructed by Maxwell to massage his neck."

At the #DemConvention, the former President says Trump should use the Oval Office in a different way.

"You have to decide whether to renew his contract or hire someone else." pic.twitter.com/P2zlCuoS31

According to the newspaper, Davies had said that Clinton was a 'complete gentleman' on the trip as she described how the encounter occurred.

However, online people argued that even if the former president didn't take part in the abuse Davies and other girls suffered from for years, he must have known about Episten's activities, especially that it went on for several years, and that the first complaint of sexual assault was filed against the Epstein and Maxwell in 1996, during which Clinton was in the White House.

Ever since Ghislaine Maxwell was arrested last month, the Epstein case has regained momentum as investigations continue to reveal more details about her involvement in the sex trafficking ring run by her long-time friend between the late 1990s and early 2010s, especially that her name was mentioned numerous times by victims who have come forward about years of exploitation by the American financier.

Additionally, analysts have been interested in knowing whether the British socialite has finally started cooperating during investigations and whether she is the one who leaked the photos. They also wondered if she will be revealing the names of people who might have been involved in Epstein's sex assaults, especially former US President Bill Clinton, current President Donald Trump, and the Duke of York Prince Andrew.

Some commentators worry that Maxwell might face the same destiny as Epstein's if she was to expose any prominent people.#JeffreyEpstein #USAhttps://t.co/zOIp0pSh6g

Epstein had been arrested a year ago on charges of sex trafficking of minors in New York and Florida before he was found dead in his prison cell on the 10th of August 2019 at the Metropolitan Correctional Center in New York.

News of his death had sparked a lot of doubt over whether he had actually ended his own life or if he was killed in a scheme to hide any information he might expose in relation to prominent world figures or not, especially the second son of the Queen of England, Prince Andrew.

not a Clinton stan but

"Davies, now in her early 40s, said of the massage pictures: 'Although the image looks bizarre, President Clinton was a perfect gentleman during the trip and I saw absolutely no foul play involving him.'"

I wonder if he (or Killary) will get into this in their Democrat Convention speechs this week. I'm sure would be a lot more interesting then garbage we saw last night.

Commenting on the shocking photos, social media users expressed their surprise that Clinton still doesn't face criticism from supporters of the Democratic party, especially as he showed up in a videotaped speech to endorse the DNC nominee for president 2020, Joe Biden.

Here we go again. Democrats and Republicans trying to prove who's the most disgusting between Bill Clinton & Donald Trump. Hello.... Both men are nasty, womanizing, sexist men. So please STOP! It's a losing battle. #metoo #Epstein pic.twitter.com/VOl8xrNvIp