Egypt’s first direct airline with Israel is set to start today October 3rd as the first EgyptAir direct flight is scheduled to land in Tel Aviv airport declaring the start of the Israel-Egypt airline route. However, the announcement of direct flights has raised questions about Egypt's possible normalization with the occupation. 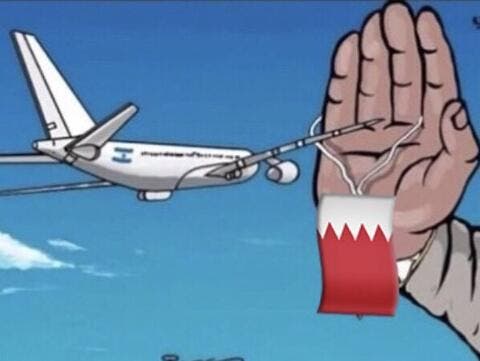 Bahrainis Say No to The Israeli Embassy in Manama, No to Yair Lapid

About three weeks ago, EgyptAir, the national airline of Egypt, announced it would operate direct flights between Cairo and Tel Aviv by October, the Times of Israel reported.

For the first time: an @EGYPTAIR plane will land in Tel Aviv, signaling the start of the EgyptAir Israel-Egypt line
🇪🇬🇮🇱https://t.co/eDJ98Ubssy

Media sources revealed that the line will cover four direct flights every week from Cairo to Ben Gurion Airport in Israel’s Tel Aviv adding that the route is not new but was managed earlier by AirSinai, a subsidiary of EgyptAir, which operates the flights in unmarked planes without the Egyptian flag.

Earlier direct flights managed by Air Sinai began in the 1980s in order to fulfill the terms of the 1979 peace deal between Israel and Egypt, but were kept discreet amid lingering hostilities between the nations, the Times of Israel said.

Pro-Palestinian activists have slammed direct flights between Israel and Egypt claiming that it could mean a new normalization deal is underway regarding human rights violations the occupation is committing toward Palestinians along with forced  evictions and ethnic cleansing in Palestinian territories including Sheikh Jarrah.

"I welcome the joint efforts of the USA 🇺🇸, Sudan 🇸🇩 and Israel 🇮🇱 regarding the normalization of relations between Sudan and Israel, and I value all efforts aimed at achieving regional stability and peace." - Egypt's 🇪🇬 President Abdel Fattah el-Sisi https://t.co/Ie9puOKHzU

After the announcement of the Abraham Accords, the Egyptian president Abdel Fattah Al-Sisi has hailed the agreements and described them as an achievement toward regional stability and peace.

About the Egypt–Israel peace treaty:

The deal aimed at normalizing relations and the withdrawal by Israel of its armed forces and civilians from the Sinai Peninsula, which Israel had captured during the Six-Day War in 1967.