Not Cute? Netflix Film Accused of Pedophilia is Trending in These Arab Countries

Despite weeks-long controversy ignited first by its trailer and later by its storyline, the French-speaking Netflix movie "Cuties" has successfully ranked amongst the top trending titles in many Arab countries, prompting questions over 'hypocrisy' pointing out massive calls to boycott and cancel the streaming service in the same countries where the film has been trending. 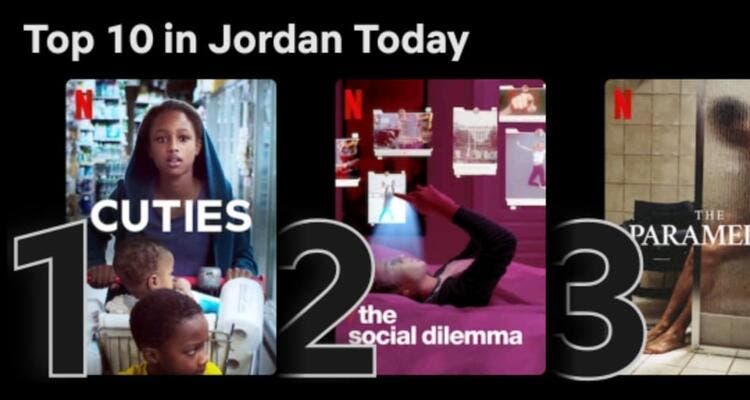 For the last few weeks, many tweets have highlighted the fact that the French film has been trending in several Arab countries, including Saudi Arabia, the UAE, Bahrain, Jordan, Qatar and others.

cuties is top 9 in the UAE apparently <3 pic.twitter.com/wtN2hlNY3Z

Ever since the trailer of the film, created by the French-Senegalese Maïmouna Doucouré, Cuties have landed in trouble as people have accused it of promoting pedophilia, especially as the poster had featured 11-year old girls twerking and performing dances that have been described as "sexually provocative."

Back then, Netflix responded with an apology saying that the post was "inappropriate" and that it doesn't necessarily reflect the content of the movie.

We're deeply sorry for the inappropriate artwork that we used for Mignonnes/Cuties. It was not OK, nor was it representative of this French film which won an award at Sundance. We’ve now updated the pictures and description.

However, Netflix's apology didn't calm commentators down, but rather encouraged calls to boycott the movie, in addition to numerous tweets reporting "canceling Netflix subscriptions," especially as the hashtag #CancelNetflix went viral for several days last week.

The Netflix boycott has actually resulted in massive financial losses on the video streaming service's part, but this didn't stop the controversial movie from drawing attention.

#Netflix aka #Pedoflix has lost over $9 billion in market value since the #CancelNetflix hashtag went viral over the show "Cuties" which depicts young girls, age 11 being sexualized among other things.
Good. ?#SaveOurChildren pic.twitter.com/5ASFhjPcWC

In many countries around the world, including the US, Cuties showed up amongst the trending titles for several days following its release, but more surprising was the fact that the movie has also been trending in many Arab and Muslim countries, including the most conservative ones such as Saudi Arabia and the UAE.

Translation: "Why is Cuties trending #2 on Saudi's Netflix? Pedophilia or Curiosity??"

Translation: "Cuties is #1 trending in Saudi."

Shocked by the irony, many social media users posted screenshots of Cuties in the top trending list in their countries, as they questioned the reason behind the surge of interest in it, wondering whether it has to do with curiosity or hidden pedophilia in the community.

Just realised "Cuties" is the number one trending Netflix show here in Bahrain. If you are a Muslim parent and your child has open access to Netflix then shame on you. You are a bad parent. Period. pic.twitter.com/8WnnOD0fzy

Last week, CEO of Netflix revealed shocking details about the platform's "deal" with Saudi Arabia, saying that they had agreed to remove a 2019 episode of the "Patriot Act," which was critical of the Saudi Crown Prince Mohammad Bin Salman, in exchange for movies and TV shows with sexual content that wouldn't have been allowed in the conservative kingdom otherwise.

Why is "cuties" top 5 in qatar's netflix? Not your disgusting pedo asses encouraging netflix even further. DONT WATCH IT. WHAT IS WRONG WITH U