As millions of Arab Muslims welcome the holy month of Ramadan with traditional dishes and an annually renewed list of TV shows, viewers in Yemen could not help but notice what they described as a "new racist show." 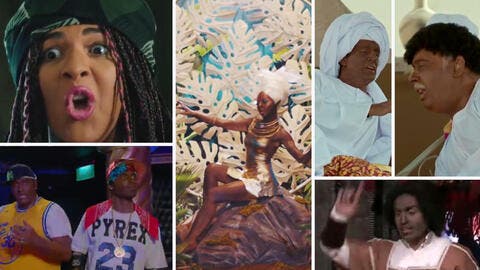 We Need to Talk About Racism in the Arab World

Translation: "Cappuccino show includes several deliberately racist scenes. First, the black face, but also how the other actress feels disgusted after Sofia with black face kisses her as though she was dirty. This shows that black skin translates as dirty to them. Yemen Shabab channel is being racist against black people."

The new sitcom called Cappuccino which airs on the Yemen Shabab Channel has featured at least two black faces so far, which has triggered a strong backlash online.

Internet people condemned the act, saying that people working in the entertainment business in the Arab World should know better by now, as controversies over the black face continue to take place every now and then.

Amongst the commentators, there were many Black Arabs, who highlighted the fact that they are still facing racism within Arab communities, and that such social practices are not limited to TV shows aired during Ramadan every year.

we got enough from muslims,media , tv and society , we are not for your entertainment,we are normal human being, with huge dignity,stop it, each Ramadan you make some ugly shows about us, do you think it is funny/you are sick, and humane-less society#ايقاف_كابيتشينو_العنصري

Almost every year, one or more Ramadan shows prompt criticism over casting non-black people for black roles using the black face paint technique, which has been highly regarded as a racist one worldwide.

Using the hashtag (#ايقاف_كابيتشينو_العنصري :Stopping racist Cappuccino), Twitter users called on the channel to cancel the show to show respect to the black community in the Arab World, and particularly in Yemen.

'I Wish I Were Black': Lebanese Artist Under Fire for Blackface Meant to Show Solidarity With Black Lives Matter
Egypt's Shaimaa Seif in Blackface Sparks Social Media Anger
How was Racism Normalized in the Arabic Pop Culture and Media?
Tags:Racismracism in the arab worldblack faceRamadan showsitcomYemenYemen Shababcappuccino show

Houthis to Launch a Criminal Probe on Yemeni Model

Lavrov: Russia is Committed to a Peaceful Solution in Ukraine